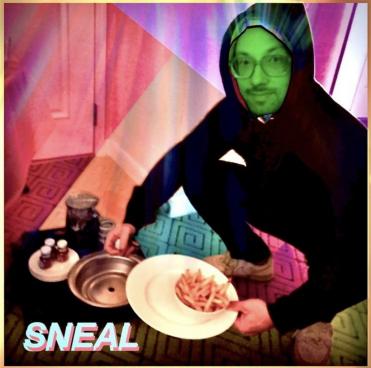 Join Your Mom on Thursday, July 9th @ 1:30PM for an interview with SNEAL. Together, they discuss his life as a visual artist, experimental filmmaker, and songwriter. They also play an hour of songs curated by SNEAL himself.

SNEAL is the musical outpost of the larger organ donor art factory that is SNEAL. Featuring Michael Coleman, Kurt Kottheimer, and SNEAL himself, who is, of course, the manifestation of these collected organs in a single body that was able to make it to the studio on the train. The music is the sum of their influences, T-Pain and Captain Beefheart. Half of it was forcibly composed by the ghost of an automaton that gained “free will” somewhere inside Kurt’s hard drives.

SNEAL recorded previously with Mr. Coleman, et al, under the moniker RELIGIOUS PHASE. SNEAL’s music and video work can be found on the website SNEAL.biz, and on YouTube at the SNEALDOESLUNCH channel.