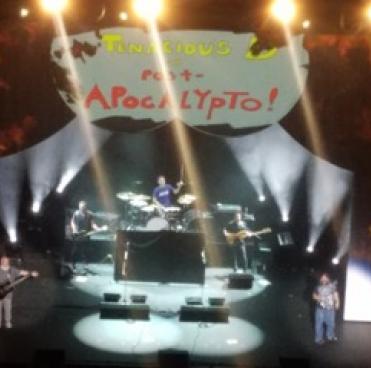 On December 17th, 2018 KALX volunteer Stormy Phoenix saw Tenacious D at the Fox Theater in Oakland. Read her take on the eccentric performance the group put on.

After an HBO special and a movie, Tenacious D are still rocking hardcore with 2 sold out shows!

Monday is the busiest day of the week. It’s the first day back at work or for most back to school. With finals and the holiday season over, Monday night was just right for Tenacious D rockers/best buds Kyle Gass and Jack Black to start the week at the grand Fox Theater in Oakland. My friend Michael invited me to their first sold out show. Given that I’m a huge Jack Black fan and that my favorite Bay Area venue is the Fox, I just couldn’t resist. As fans were lining up to purchase Tenacious D merch, we sat in our balcony seats watching the talented yet funny opening act Wynchester (a duo formed by Mike Bray and John Konesky). The two country guitarists/vocalists strummed their hearts out to their songs “Two Man Job,” “Cliff” (about Tenacious D’s tour driver) and even covered the Commodores/Lionel Richie’s’ 1977 hit “Easy.” As they were near the end of their set, the duo joked, “Are you ready for the greatest band in the world? Because, it’s not us.” Ironically, both members are associated with Tenacious D and the Kyle Gass Band. Just before leaving the stage, they confessed “Tenacious D are our heroes and our angels” then shredded into their final song. After a thirty minute intermission, the “greatest rock band in the world” shed light onto the dim stage. As everyone was hurrying back into their seats and others yelling “Sit down already!” there appeared behind the screen none other than Black and Gass jamming their opening theme: the title track to their fourth album Post-Apocalypto.

The first half of the concert focused on this album—and on a six-part animated film hand-drawn by Black and voiced by Black and Gass—both narrating Tenacious D’s mission and journey to save the world. This portion of the concert paired episodes from the Post-Apocalypto film series followed by a live performance of their songs featured on the new album (“Chapter 1 (Hope),” “Chapter 2 (Cave),” “Making Love” and more), the sequencing of which became a back and forth comedic routine. One moment you’re watching an episode then Tenacious D complements the video with a live jam session. The films themselves are comical but definitely for mature audiences. It was similar to a South Park sense of humor with its crude and sexual content (yes, lots of penis!). However, the plot and performance had the audience roaring with laughter. The scenes and music told us a story about two underdog heroes who just want to rock, but face vast obstacles, from battling an Amazon woman and a genital monster to befriending a horny terminator (my fav character). One episode had the duo disguising themselves as the KKK to enter the White House to steal a magical crystal guarded by Donald Trump Jr—the typical stoner imagination Tenacious D fans go crazy for. The entire experience was a theatrical, entertaining and utterly complete comedy mock rock show. It felt like a 3 for 1 show that even Black shouted “This is what you paid for Oakland!” and adding “Oakland is the sexiest town.” 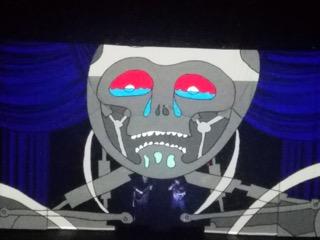 As the series ended, the screen rose and Tenacious D walked to the center front of the stage while playing hits off their previous albums Rize of the Fenix, The Pick of Destiny and their self-titled debut. Black mentioned “We’re time traveling back to our albums, which we release every six years.” Realizing that, it was a nice segue and structure to the concert going in reverse looking back at the band’s twenty-four year history. They began singing “The Metal,” “Dio,” “Kielbasa” and of course ‘the greatest and best song in the world’ “Tribute,” the song that fans were dying to hear. It was hilarious to see Black’s mannerisms live as he is such a natural-born rocker and his moves reminded me of his School of Rock days when he was head banging and knee jerking. Black and Gass are just epic together as they show their friendship and shared passion for rock-n-roll on stage. Throughout their performance, bright artistic visuals and imagery accompanied their entire set. Right before the encore, each member of the production had their own rockstar solo—even the lighting man—which was electrifying! Then Black dedicated this next song—“F*%k Her Gently”—to all the girls and guys and everybody sang in unison like a choir. At the end of the show, Black said his final words, “Oakland—We f*%ked you hard!” I have never laughed so hard at a concert in my life. 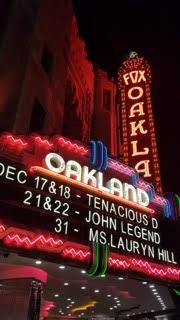