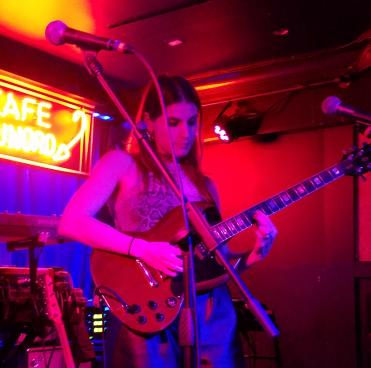 TEEN lights up the mood in San Francisco at Cafe Du Nord playing a sold out show with Australian band Methyl Ethel.

Sister band TEEN hail from Brooklyn, New York as they venture here to the Golden Gate city. The Lieberson sisters–Kristina “Teeny” (bass/guitar/vocals), Katherine (drums) or Sarah Galdes (live drums), and Lizzie (keyboard/vocals)–formed TEEN in 2010 and signed with Carpark Records in 2012 for their debut album. The Guardian describes TEEN’s latest studio album Good Fruit as “reminiscent of inventive late-70s to mid-80s pop groups,“but the live experience is much more than that. Their sticky-hot choruses and funky synth pop anthems could shake up any venue.

The lights dimmed in warning of the imminent funk wave about to pass through Cafe Du Nord, and the voices of the audience dropped silent as anticipation grew. Red and Blue lights showered the stage as TEEN sauntered into the spotlight. Kristina and Sarah wore zebra and reptile printed shirts sending a message that they are animals who just cannot be tamed while Lizzie wore all black. The majority of TEEN’s songs are psychedelic neo-soul, but the lyrical notions of serious themes like womanhood, power, and social constructs seep into their music as well. Right off the bat, TEEN performed “Putney”, “Runner”, “Ripe”, and “Luv 2 Luv” off Good Fruit, all of which tie into complications about lust and love in relationships. While “Putney” has this vintage southern west/country vibe with its roaring ballads, “Runner” has addictive synths running through the whole song. The upbeat track was amplified by a bassline that shook the venue floor.  The intro to “Ripe” sounded like playing an 80s arcade game with a hazy Hendrix aesthetic layered in prominent synths. Closing out the performance, Kristina echoes her voice and applause roars from the audience as they nod their heads with complete satisfaction.

TEEN is unique because there is no 'main’ singer. Each member plays a leading role in the band, and even when they sing in unison their voices are distinctive and powerful enough to isolate as vocal instruments. Kristina’s loud and vast vocal range combined with  Lizzie’s softer, sweet tone balances the dynamic. TEEN has mastered the back & forth singing style, as if a contemporary version of The B-52’s or ABBA. While performing  “Animal,” the band sunk to the stage floor in unison and slowly rose back up to their height while playing their respective instruments. They jumped back into Good Fruit with “Popular Taste” interluding to “Pretend” in which Kristina and Lizzie swap instruments–Kristina on keyboard and Lizzie front and center singing with added reverb and slapback effects. Despite a minor technical difficulty, TEEN pulled it together making this song sound beautiful like a candid experience. The last electronic beat song “Only Water” had Kristina completely engaged as she gestured hand movements as well as leaned towards the crowd and upon Lizzie’s keyboard. It was a farewell tune to their late father and a goodbye song to us.

Although they played mostly their last two albums, TEEN takes you to a musical trip from each musically significant decade: the psychedelic 60s, the disco 70s, and the synth-riddled 80s. When they left the stage and headliners Methyl Ethel took their place, frontman Jake Webb yelled “Weren’t TEEN just great!” and the audience cheered in agreement.

Jisselle Fernandez aka Stormy Phoenix has been a KALX volunteer since 2015 and is studying in broadcasting. Whent she’s not volunteering, working, or going to school, she loves to attend concerts! (Lead writer)

Elle Henriksen has volunteered for KALX since the creation of the Weblog in early 2018.  In addition to photographing and reviewing local Bay Area concerts, she serves as the Weblog Administrative Assistant. (Co-writer/editor)