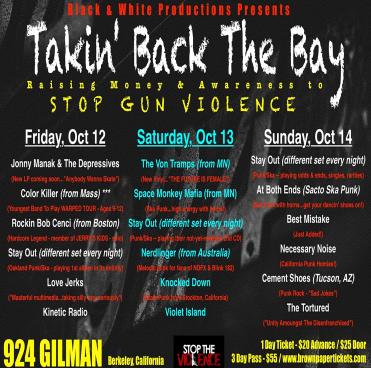 Takin’ Back the Bay is a music festival that will be hosted at 924 Gilman on Friday, October 12th through Sunday, October 14th to raise awareness and funds to stop gun violence in America. This all ages event will have a diverse array of performances every night, as well as a voter registration booth. Proceeds will go to nonprofits working to stop gun violence.

Historically, the Bay Area has been a place of both progressivism and injustice—a microcosm of the conflicts, issues, and flurries of potential solutions that society faces today—all reflected in the art, activism, and culture of this unique community.

Art as a reaction to injustice is an integral part of the rich culture of conscience in the Bay Area, and the Takin’ Back the Bay festival and fundraiser, hosted at iconic 924 Gilman, continues this tradition of community building and activism through three nights of music and awareness.

As an issue that goes hand in hand with tragedy, gun violence is a topic that generates both heavy emotions and a myriad of opinions across the country. The Takin’ Back the Bay Fundraiser aims not to lean in favor of any particular solution, but rather unite the Bay Area community regardless of political opinion, to get involved and take action against gun violence in whatever ways reflect their own personal beliefs.

“We wanted to organize a music festival with a fundraising focus on raising awareness about stopping gun violence, which is an issue that people have different opinions on, but that everyone recognizes is a problem,” says festival organizer Steven Tivey.

The festival places special emphasis on taking action that reflects one’s own personal beliefs wherever they might fall on the political spectrum, which is what seeded the idea of having voter registration present on all three nights of the festival.

“We expect to get a lot of young people at the festival and, unfortunately, there is a large portion of young people who are not registered to vote yet. And in order to affect change, it’s important to have the ability to vote, whether it’s on gun control or other issues that reflect their personal view,” says Tivey. And, in regards to the fact that midterm elections are approaching, Tivey says, “it’s great timing, in that respect.”

Given the diversity in opinions on approaching the issue of gun violence, Tivey decided that the festival should support organizations with different methodologies on how we might propose solutions, whether it’s through grassroots efforts or through working with policymakers. Everytown for Gun Safety is a coalition of several activist groups, including Mayors Against Illegal Guns, Moms Demand Action for Gun Sense in America, as well as many survivors of acts of gun violence. They hope to both support survivors as well as lobby for gun control legislation at the local, state, and federal level.

Americans for Responsible Solutions, started by former congresswoman Gabrielle Giffords and survivor of gun violence herself, will also be supported by the festival. Giffords considers herself a supporter of Second Amendment rights,working with policymakers to advocate for expanded background checks, stiffer gun trafficking penalties, and the funding of studies and research on the causes of gun violence. Both of Everytown for Gun Safety and Americans for Responsible Solutions will receive a portion of ticket and merchandise sales from the festival.

Using music as a vehicle for change and to gather support for nonprofits like Everytown for Gun Safety and Americans for Responsible Solutions is an emotionally charged project for Tivey, a project that brings his passions together. He manages local punk group Stay Out, who will be playing alongside a diverse lineup of artists. And among this lineup includes East Coast group Color Killer, the youngest band to ever play the Warped Tour, and who will have a film crew with them at the festival to feature their performance at Takin’ Back the Bay in a documentary about the band. With at least six distinct acts performing per night, Tivey says, “not only will you be supporting a great cause by going, but you’ll also see some great bands.”

By simultaneously giving bands a platform to share their music and supporting organizations with goals of bringing an end to gun violence, Tivey says the festival is an easy way to take action and get involved.

“I was sitting around watching TV reports of gun shootings and gun violence taking place in schools and office places and feeling frustrated by what was going on in our society. I chose to find a way that was of personal interest to me to get involved and begin to make a difference, rather than just standing on the sideline. Knowing that people feel the same way and are looking for simple, easy ways to get involved, coming out to a music festival is the easiest thing someone could do. You’re contributing to organizations that are making a difference while at the same time enjoying a show.”

Proceeds from ticket and merch sales will be donated to Everytown for Gun Safety and Americans for Responsible Solutions.