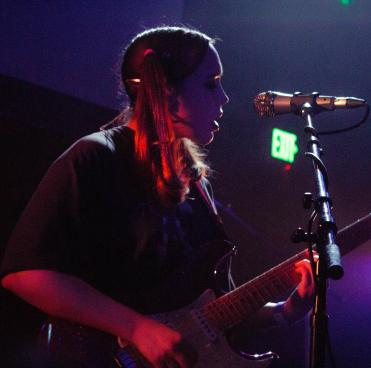 On April 17th, 2019, KALX volunter Samantha made her way to the Great American Music Hall for a performance from Soccer Mommy, with opener Boy Scouts. Get the full scoop here on KALX Weblog.

After a year of waiting, the Bay Area was graced once again with the presence of Sophie Allison, better known in the music world as Soccer Mommy. Allison first formed Soccer Mommy in 2015 while she was studying music business at New York University. Her humble beginnings playing in community art spaces blossomed in 2017 into a record deal with Fat Possum Records, her sophomore breakout album Clean, and now two sold-out shows at the Great American Music Hall. Performing between the two weekends of the world-famous music festival Coachella, Soccer Mommy has made her way back to the Bay for a show at the Great American Music Hall on April 17th and a sold out show on the 18th. The show was an intimate and fulfilling experience filled with intriguing new songs and beloved old ones. 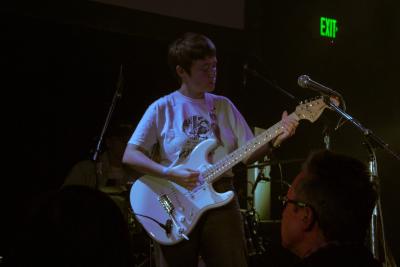 Bedroom pop band Boy Scouts opened the show with a sweet 45-minute set that my friend described as “emotionally exhilarating”. Boy Scouts’ music ranges from acoustic to indie pop to almost punk at times. The Bay Area band consists of Travis Vick on guitar, Taylor Vick on lead vocals/guitar, Rose Droll on keys/vocals, and Nikolas Soelter on drums. Their first songs were sleepy, played to a nearly empty crowd, but as the crowd filled out the room, so did the music. This was my third time having the honor to see Boy Scouts perform, and every time, their emotional lyrics and Vick’s passionate singing wraps around the room like a warm, gentle hug. Vick’s stage presence was minimal and gentle, but her voice was large and emotionally palpable. 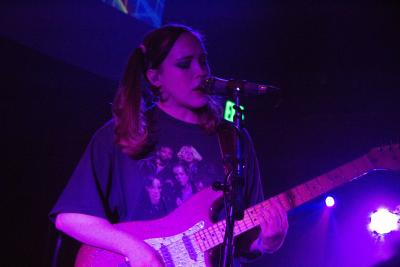 Then it was Sophie Allison and her bandmates’ turn to take the stage. Despite her most recent shows being held in a larger venue, Allison still embodied the same intimacy felt at a venue like Bottom of the Hill. After setting up all their instruments and taking a quick break backstage, Soccer Mommy began the show with a new track that meandered on over eight minutes, a timestamp significantly longer than anything she has put out before. Allison followed with an older song titled “Try” from her 2015 EP songs from my bedroom, before moving into a few tracks that everyone knew from her breakout album Clean.  Allison took the time to introduce her bandmates, saying that she hoped that we would cheer louder for them here than in Los Angeles. Hopefully, we did. In the hot air of the Great American Music Hall, Allison exclaimed, “I know it’s already warm in here, but it’s gonna get warmer. Let’s dance!” Most of her bandmates left the stage then, leaving Allison alone to play a few songs by herself. She played her rendition of Bruce Springsteen’s “I’m On Fire”, followed by a new song titled “Night Swimming”. One of the most memorable moments of the night was when Soccer Mommy played my favorite track of hers, “Scorpio Rising”, which, she announced, was one of her favorites as well. I found myself amused by the guitarist Julian Powell, Sophie’s boyfriend, who was jumping around and headbanging like it was a much heavier show than it was. The encore was yet another new song titled “Lucy”, a mellow, sweet track that brought us an exciting taste of what’s to come for Soccer Mommy. (RIYL: Snail Mail, Jay Som, and Sidney Gish.)