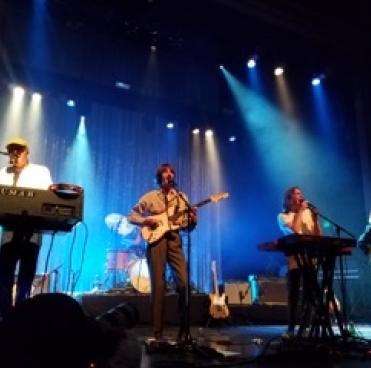 Recently interviewed by KALX DJ Nickel Hardaway after their Weekend One performance at Coachella, Parcels show who’s the true headliner at Regency Ballroom in San Francisco!

I had just arrived when doors opened for The Regency Ballroom, as I saw fans lined up outside finally entering the venue to see Berlin electronic band Parcels. Shortly after when I made it to the front and everybody else was finding their places to stand, the opening act Undercover Dream Lovers enlightened us with their 30-minute set of pure psychedelic indie sound. After wrapping up, the Undercover Dream Lovers gave a quick shoutout to headliners Parcels saying, “Who’s ready for Parcels? They know what they’re doing.” Soon after they left, Parcels came on stage undercover with black hoodies setting up their own stage/equipment before their show time at 9:45 PM while intermission dance music played in the background. Fans in the front who recognized them shouting “I love you guys!” was just the start of the night. Once they returned fully dressed and started playing their song “Comedown” (off their self-titled), the audience went crazy and got tightly closer! The five members (keyboardists/vocalists Louie Swain and Patrick Hetherington, guitarist/vocals Jules Crommelin, bassist/vocals Noah Hill, and drummer Anatole “Toto” Serret) all lined up side by side down stage. Patrick kept whipping his hair leading him to sweat, Noah moved all over the stage, and Toto matched the beat of the drums with our heart beats.

After they jammed into a long instrumental piece, Parcels jumped into their next song “Lightenup,” with Patrick picking up his empty beer bottle and tapping it like another percussion instrument. Lights constantly changed from purple, blue, or green to even shining at the crowd, who were dancing to Parcels’ 70s influenced funk. Lights flashed during their third and fourth song “Myenemy” and “Gamesofluck” from their second EP Hideout. Patrick got into the groove tapping his foot and Jules jumped into the rhythm then slowly as the music went into decrescendo. Their music was so funkadelic that Regency Ballroom felt like a 70s disco club scene. It was a reflection of Parcels dancing on stage as well as the crowd mimicking the band. Parcels then played my favorite song that introduced me to them, “Withorwithout”! Even the high production video to the song is like watching The Purge starring Milla Jovovich. When they all sang in unison it definitely gave a lingering intimate yet creepy feeling. Their song reminded me of another classic “Eye in the Sky” by The Alan Parsons Project with it’s soft arrangements of classic 70s vibe and funky EDM tones of The Ting Tings.

When they performed their first half of the set, the audience applauded and cheered. Jules spoke, “We didn’t deserve that. Thank you for being here! We did say we’ll be back. Now everything we say you have to believe.” Then Parcels quickly segued into their harmonic song “Exotica”. They took another moment to address the audience saying, “San Francisco has the best city name because it rhymes with disco!” Coachella’s crowd doesn’t come close in comparison to San Francisco as we got down to boogie to the next song “Bemyself” when drummer Toto moved front to play the tambourine. The crowds’ claps matched the drum beat and Louie snapping his fingers. As they played, Parcels shouted, “Are you still with us San Francisco?” When we replied back in a loud cheer, that motivated the guys into their next jam “Older” as Patrick kicked off the song hovering over his keyboard. Claps got louder with the music to “Yourfault,” then in “Everyroad,” the subtle music from the beginning transitioned to a heavy bass dubstep with the lights flickering like in a rave.

I was excited when they performed “Tieduprightnow” because it became a dance party on the floor, and for a second, I thought a disco ball would be hanging from the ceiling. Even Parcels took noticed and said, “We love you guys. You’re on fire!” They admitted they make their songs for people to enjoy themselves dancing to the groove. Even the people in the balcony were standing to their song “Closetowhy” and their rhythmic hit “Overnight”. A Daft Punk-produced song I couldn’t wait to hear live after seeing them perform it on Conan! Jules and Patrick played their guitars across each other, and went to the back to visit Toto, who was doing arm movements to their song.

When they played their final song “IknowhowIfeel,” each member of Parcels left one by one as a dramatic exit. The Parcels show was the most I ever danced at a concert. Next time they come to town, I’ll bring my dancing shoes!