Show Review: Overcoats @ The Warfield on 11/3 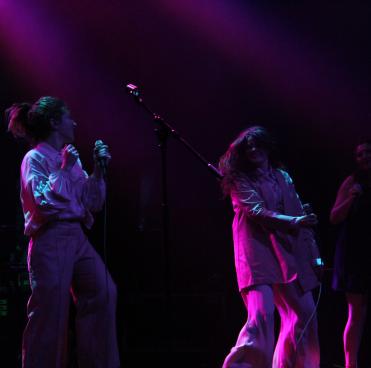 If Mitski, the Warfield’s headliner on the night of November 3rd, embodies the self-love, patience, and pain that comes with loneliness, her opener Overcoats etherealize the same themes on their debut YOUNG – but with the comfort and companionship of having another voice by your side. Overcoats, a New York electronic pop duo consisting of Hana Elion and JJ Mitchell, started the night with a heartfelt embrace. The two best friends exchanged grins before turning back toward the crowd and wafting into the opener – a slick, pulsating number called “Smaller than My Mother.”

Elion and Mitchell’s voices are almost one and the same, their timbres lapping each other in a seamless blend throughout the show. The effect is otherworldly: as Elion and Mitchell sonically dance with one another, it’s as if a single vocalist is harmonizing with herself.

In physical performance too, the Overcoats traverse on the same wavelength. Both donning sand-colored, oversized suits, Elion and Mitchell would mirror eachother’s motions, taking turns twirling one another, swaying in sync, and flexing in choreographed movements. During synth-y gospel-tinged track “The Fog,” a song about reclaiming oneself in the aftermath of a negative relationship, the Overcoats undulated their bodies in an almost defeated manner, perhaps to echo the “I’m so over it” inflections in the song’s lyrics.

The Overcoats then introduced another melodic influence of theirs with “Walk On,” a more country number that recalls a sort of cowboy weariness. Blue stage lights mimicked water crests, rippling behind the duo. “Walk on / I don't wanna remember your name / Anymore,” crooned Elion and Mitchell in gossamer harmony. 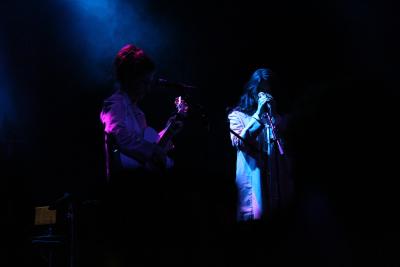 An incredibly touching cover of John Lennon’s “Imagine,” in honor of a friend who had recently died due to gun violence, marked the middle of the Overcoat’s set. In the midst of darkness, “Imagine,” said Elion, is “a song that gives us hope.” The Overcoats momentarily traded their synths and drums in for an acoustic guitar, which over gentle strums delivered a serene, heartfelt performance.

This sense and expression of unity, support, and togetherness were abound in other moments of the night as well. It was subtle, like when Elion and Mitchell alternated wrapping their arms one another. It was also more explicit too; during “The Fog’s” interlude, Mitchell said in her normal speaking voice, “The future is believing in women.” To a crowd mostly populated with young women, (save for the higher-than-expected number of male Mitski stans amongst us), the statement was resoundingly meaningful.

For the last few songs, the Overcoats invited a few of their friends to join the band in closing the night. Leaving the last third of the set for poppier, bouncier tracks, the Overcoats sheathed their wavers and sways for thrashes and kicks with their friends on stage. By the time club-ready bop “Leave The Light On” ended, Elion and Mitchell crashed onto the floor. And just as the evening had started, the Overcoats smiled and hugged one another once more.