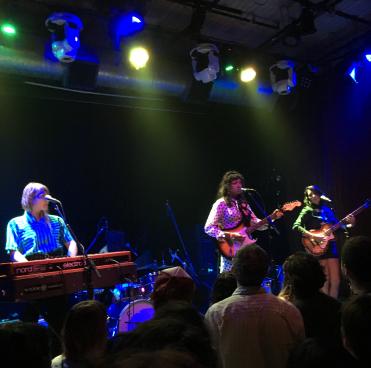 La Luz lights up the Rickshaw Stop at 5/11 show.

Sometimes the first inklings of summer don’t come from the weather. It may be opting for a park picnic over a cafe hangout, finding mystery sunburns, or switching from hot toddies to margaritas (for the legal folks, of course). For me, summer 2018 began on Friday May 11th when La Luz took the stage at the Rickshaw Stop. The Seattle-created and currently Los Angeles-based quartet performed to a sold out crowd. With support from Ancient Forests and local band Cool Ghouls, they delivered an electrifying show that left us floating. The mood was celebratory, as it was also the release day of their third album Floating Features out on Hardly Art.

They opened with “Floating Features”, an instrumental track from their new album. From the first note, you can hear the evolution in sound; guitarist/vocalist Shana Cleveland and bassist Lena Simon command with complementary psychedelic solos, all the while dueling with keyboardist Alice Sandahl’s Doors-esque keyboard solo. While they’ve had more surf-oriented rock, the psychedelic influences that have been knocking for years finally burst through. The audience bobbed their heads, digging the new sound. It was such a seamless transition that we did not notice drummer Marian Li Pino’s drum kick malfunctioning. To placate the crowd, Cleveland offered up a Jonathan Richman impersonation, which broke up the tension of the moment. They quickly recovered, and went into “Cicada”, another new one. Li Pino’s punchy drumming and Sandahl’s rhythm laid the foundation for a swirling, psychedelic song with dynamic reverb-laden chords. This song featured their classic harmonies, which sounded tighter than ever. 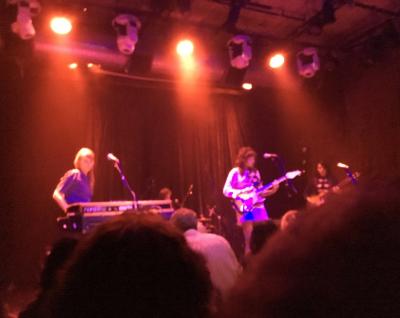 For their third selection, they threw it back with “Call Me in the Day”, a dreamy track from their first album It’s Alive. Channelling the coyness of so many ‘50s girl groups, Cleveland sings of her frustrations, telling her lover: “you see me only on the need/ In the evening, when you're feeling mean” while the band sings “bop bop, bawoo bop” somberly in the background. Slower and more ambling, it provided a nice lull in the rhythm of the set. Despite the bitter overtones,  their synchronized dance moves during Sandahl’s solo kept it light. A new song came soon after: “The Creature” was simpler in composition, but lyrically the most poignant. In the chorus, Cleveland sang of ”the creature”:

Felt it creeping from my head down to my feet
The creature let me know that it would be walking with me.

La Luz toes the line between spooky and catchy with this song, incurring a sense of dread within pop hooks. Especially as music takes a more political stance in a charged time, sometimes it’s necessary to speak of the darkness we feel and put it out on a more massive scale. It was a personal favorite of the night.

For the next song, Cleveland came to the mic to let the crowd know she was nervous, as this was the first time they were playing this next song in public, and the audience made sure to make her feel welcome. The song in question was “Walking Into the Sun”, a slower, more touching song about “falling in love, walking into the sun”. With the simple twangy rising and falling guitar notes, doo wop harmonies, and slow dancing, it was only natural that the disco ball started spinning. It was a moment that reminded me of the power of live shows where that intimacy shared with a band grants you these serendipitously perfect moments that will stay with you long after your concert days have passed.

They ripped through “Sunstroke”, “Loose Teeth”, I Wanna Be Alone”, Mean Dream”, “Sure As Spring”, and “Lonely Dozer” until the finale, which was “Easy Baby”. Similar to “Walking into the Sun”, it was a slower number with twinkling guitar, and Cleveland sang of her lover as they left. While the main show ended on a somber–albeit beautiful–note, they made sure to give us a song “[we] could mosh to” for the encore, in the words of Sandahl. It was only fitting that they played “You Disappear”, a classic surf rock ripper. Suddenly the floor was moving with flailing bodies. They graciously thanked the crowd as we cheered.

La Luz continues to tighten their sound and find new ways to refine their ‘60s sound in spectacular ways. While this show was tamer than previous outings (which usually end with the band crowd surfing), they still find ways to keep their audience dancing. La Luz floated to the top with this show–and it won’t be the last you hear of them.

Chandler graduated with a Media Studies degree from Cal and has been at KALX since 2014. You can hear her on the air as Hella Bent, or IRL in a karaoke bar singing “Like a Prayer”.