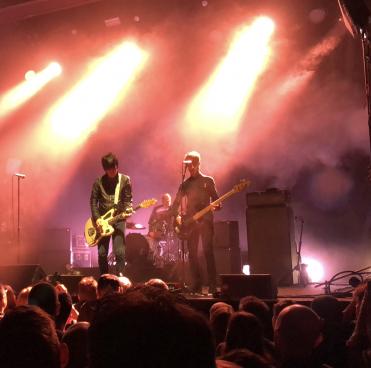 Johnny Marr revives the post-punk age with a reminiscent performance at the UC Theatre.

The UC Theatre was alive on September 25th with Johnny Marr’s transcendent performance. Iconic guitarist Johnny Marr’s solo career is just as celebrated as his work with post-punk band The Smiths, and his talent has by no means faded. Each of his many wrinkles is a testament to another year of raw intensity, and his calloused fingertips an ode to the beauty that he has bestowed upon listeners for decades.

At showtime, the lights are a warm deep purple as they gleam off of Marr’s shiny coiled guitar strings. Every face in the audience glows with fascination and awe–it makes you wonder what Marr was thinking as he gazes right back. Perhaps he senses our lust for that nostalgic 80s jangle pop vibe, because within the first few songs Marr gifts the audience with The Smiths’ classic hit “Bigmouth Strikes Again.”

On this night, the UC Theatre hosts an audience of fans looking to bask in the soundscape of their youth. Johnny Marr jokes with us, spewing British word-vomit into a playful rap that has the venue on their feet with anticipation. This show is intimate. The entire concert felt like a conversation between Johnny Marr and his fans, a give and take through each surge of melody. 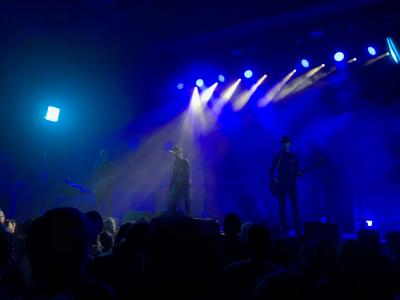 Marr speeds up the tempo as the venue transforms into a nightclub. The audience dances as Marr’s iconic tremolo-picking sends vibrations through the air, sound radiating from his guitar. These complex compositions sounded viscous, like rich fluid sound that poured from the stage and let its listeners float.

Marr released a new song called “Jeopardy” on September 21st, which is littered with dirty guitar riffs and delightfully shivering vocals–beautiful hallmarks of his claim to fame. Released earlier this year, “Hi Hello” is a more delicate track that Marr definitely enjoyed playing, as his smile so obviously indicated.

In person, Johnny Marr gives off the same artistic flair that his 80s self so perfectly mastered–his stringy black hair flopped around while his iconic guitar rippled through the venue. Marr wrangles that guitar like an instrument begging to be tamed–his technique remains somewhere between violently unique and playfully eloquent.

As a multitalented, well-rounded musician, Johnny Marr has definitely not lost his touch over the years. Marr’s knack for gauging a crowd and communicating through music is what made the concert so electric. Johnny Marr is closing out the year touring throughout the US and Europe–catch him live while you can!