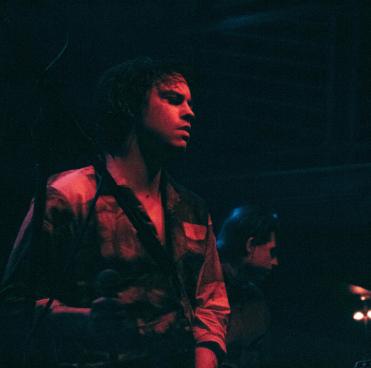 Even the uncharacteristically hot weather could not keep Danish punk rock band Iceage away from the Bay Area for long. These post-punk rockers made a stop at The New Parish in Oakland, California on April 23, 2019 after playing two weekends at the Coachella Valley Music and Arts Festival. Iceage has been touring since the release of their fourth studio album Beyondless, released on May 4, 2018 by Matador Records.

This was my first time at The New Parish, and it definitely a venue I would like to come back to. The venue features an open-air courtyard in the middle where you can order Caribbean food before entering the indoor main stage area. The New Parish is small and intimate, and it features an ornate balcony with a great view of the stage so guests can watch the show from above at all angles. When the doors opened at 8:30PM, the crowd started small, and I was worried that there would not be enough people to start a substantially decent mosh pit, but the crowd soon packed in, ready to get down.

First to the stage was Pelada, a Montreal-based Latinx techno band, who were a surprise to me since The New Parish website and Facebook did not list them on the bill. In addition to being a surprise, Pelada’s set was also extremely intimidating as lead singer Chris Vargas kept screaming at the crowd to “move the f*ck forward” or to “f*cking wake up and move a little.” She also threatened to jump over the barricade and slap us, which definitely made me feel a little nervous since I was right at the front. Understandably, the plight of the opening act is hard since many people are not at the show to see the first band and are likely not going to move very much during their set, so I can see why this would be upsetting to her, especially because Vargas was extremely passionate in vocal and physical delivery. Their music was politically charged, raw, and energetically captivating, and despite her aggressive stage presence, I would recommend that people check out their music. 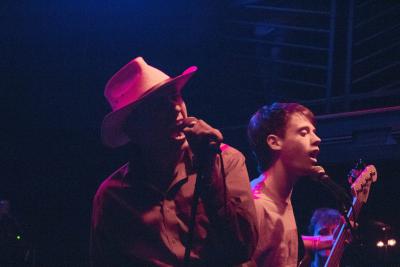 Up next, post-punk rockers from South London, Shame, took to the stage with an extremely hard-hitting and bonkers set. The pit opened almost immediately, and people were stage diving and crowd surfing like the audience was a pool on a hot summer day. It only took about one song for me to become completely drenched in sweat. Shame has been touring for the last two years in support of their debut record Songs of Praise, released on January 12, 2018 on Dead Oceans, and they played mostly songs from their debut but they also tried out a few new songs as well, much to the delight of the dancing crowd. The energy from both the audience and the band was palpable, and lead vocalist Charlie Forbes had to remove his shirt only a few songs in because the venue was so hot. During their last song, “Gold Hole,” Forbes made his way into the crowd, with people supporting both of his feet and one of his hands so that he was standing on top of the crowd. Upon reaching the climax of the song, Forbes let his hand go, completely balancing on the crowd, before promptly falling face-first into the ready-crowd where he then poked me in the eye, knocking out one of my contacts. Luckily, I was able to put it back in without too much suffering before Iceage’s set. Even though I lost a contact, Shame rocked hard and if you have the chance, see them. It will be awesome. 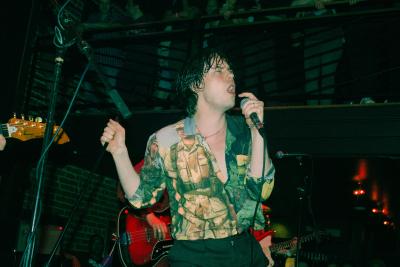 Last but certainly not least, it was time for the headliners of the night, Iceage. Guitarist Johan Wieth, bassist Jakob Pless, and drummer Dan Nielsen took the stage before vocalist Elias Ronnenfelt strode on with a cool swagger. The crowd erupted in cheers and fist pumps, and the band jumped right into “Hurrah” from their latest record. Immediately people started moshing, singing, yelling, dancing, and raising their hands into the air. It was extremely captivating for me to experience. Many of the audience members seemed to be in such a euphoria, like they had been waiting a long time for this moment to arrive. At the climax of the song Ronnenfelt plunged into the crowd, who caught him with smooth expertise. They guided him above the crowd back to the stage where he landed smoothly onto his feet and finished the song. Ronnenfelt’s electrifying stage presence filled the entire venue: he was swaying, jumping around on stage, and even laying on the ground, absorbed in his own passionate agony. By comparison, his bandmates were focused on the dark, driving, dissonant songs. Although smaller, the crowd still embodied the same high energy as for Shame with stage divers, crowd surfers, and relentless moshing: a real treat of a show to attend. 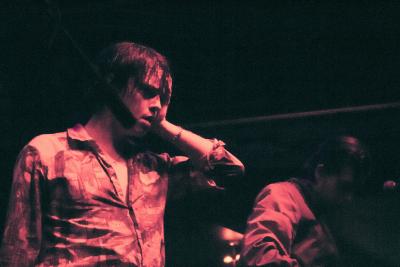 Overall, I had an extremely fun time for my first show at The New Parish, and I enjoyed all the sets from each of the three bands. The crowd was energetic, excited, and ready to dance. If you can take the heat, definitely check out any of these bands’ live shows if you have the chance.