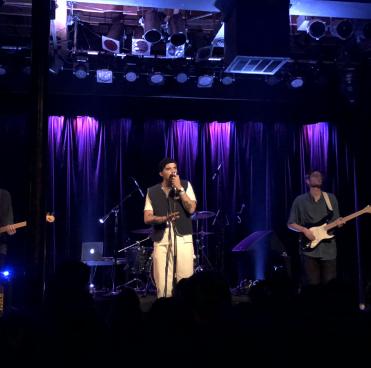 Forget the overdone DIY lo-fi and surf punk grunge scene because neo soul band Hablot Brown is about to take over.

Alternative R&B band Hablot Brown is elevating soul music with a steady pace that’s guaranteed to find themselves at the top of your playlists. They opened for jazz R&B artist Jordan Rakei in 2017 at the Fillmore, and only one year later are performing their first headline show at San Francisco venue Slim’s. Greeted at the door with venue staff describing Hablot Brown as “baby-making music,” audience members can agree that this show was nothing short of a sexual experience.

Blue toned lights showered the stage, cueing in “Little Bit” to pollute the venue with R&B blues. Vocalist Linus Hablot snapped his fingers and swayed his hips–a slave to the groove. Linus Hablot’s lips graced the '50s style microphone as he introduced unreleased track “Fool of Mine.” Hablot Brown has aesthetic and musical style, with distinct performative personality that makes the live experience worth it.

An instrumental intro kicked off “She Said” as Linus Hablot hummed with a sublime summoning of groove rock. With the bassline and drum beat in synchronous groove, the collective sound resonated in the chests of audience members. If there is any question of whether Hablot Brown has what it takes to redefine soul and become the new face of R&B, then hearing Linus Hablot sing “I want you to feel it” will undoubtedly cure all curiosity.

With banter no different than any crew of friends, Hablot Brown seemed perfectly comfortable on stage, as nervous energy seamlessly turned into a groovy jam session. With the pick between his lips, guitarist Austin Brown slid his hand from fret to fret, letting the funk speak for itself. Linus Hablot and Austin Brown shared a smile– a smile that tied in the meaning behind the band name. Sometimes drummer John Brown flowed under the radar, but his solo surely reminds the audience of his essential presence. The band mentioned their past night drive from Seattle to San Francisco, but reassured the audience that they are “beyond happy to be here.” 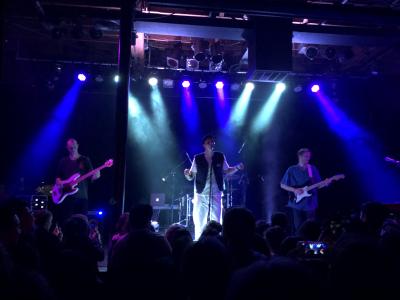 In the contemporary music scene where most beats are artificial and basslines pre-recorded, there is value when a band can play their music live with expertise and sought-after creative passion. Cosmic shockwaves coursed through the veins of audience members as “Tied Up” filled the venue with an inescapable dance beat. Linus Hablot moved with unchoreographed intention, his cherry cheeks reminding us that the concert is a transcendent experience for both the band and the audience. Linus Hablot pointed into the crowd: “I wanna see you guys move, I wanna see what you guys got,” prefacing the funky dance beat of the upcoming unreleased track. Lucky us, Lucky you.

Within an industry that seeks pop-driven vocals and rock beats, Hablot Brown chases a modernized soul sound. The November 28 release of Tim Atlas and Hablot Brown collab “Color World” drips with synth and electronic jazz. Hablot Brown seems to add a funk twist to soul music, leaving fans curious about the direction of the band.

With soul-hinged lyrics, funky basslines, and the tender timbre of neo-soul, Hablot Brown draws from contemporary R&B artists without leaning on the archetypal soul music that we are accustomed to. Adorned with synth and tight-knit guitar, Hablot Brown’s sound is polished. The tour is closing out 2018, so check out Hablot Brown before they inevitably hit the big stage.