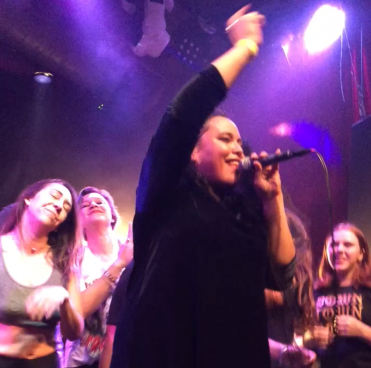 On May 20th, 2019, Rhode Island based Latinx, queer, riot grrrl punk group the Downtown Boys took to the Rickshaw Stop in San Francisco. Here's KALX volunteer Kat's take on how their performance's theme of inclusivity and direct action created an empowering experience with effects that reverberated far beyond just that night.

As soon as the music started, the pit got violent. Three large men shoved each other around with their fists clenched while the rest of the audience pulled aside. According to an acquaintance who’d overheard them talking, the men had never even heard of the Downtown Boys and were just there to mosh. I tried to jump in but was immediately pushed out and slammed to the floor. My teeth bit into my cheek and I felt my jawbone ringing.

I always feel conflicted when I make the decision to go to a show alone.

“You’re a nineteen year old girl, aren’t you afraid of wandering around the City by yourself at night?” people tell me.

Maybe. But I’m more worried about awkwardly lingering around the venue before the first band plays. I was at the Rickshaw Stop waiting to see the Downtown Boys, and as I looked around at the other people milling about the venue and talking to each other, I struggled to figure out what to do with myself. I tried to find some wall space to lean against—so that maybe I looked cool instead of lost and alone. Then, I made myself content with people watching, because I’m not old enough to keep occupied at the bar and couldn’t look at my phone like the other show loners since my battery was low from streaming music on the BART ride over.

I could feel the energy building leading up to the Downtown Boys’ set. Oakland locals, Deseos Primitivos, were the first layer of primer for the night, with a sound reminiscent of the East L.A. Chicana punk foremothers whose relevance persists today. Young women of color and queer youth took to the front—jumping, dancing, and spinning. The band that followed, Mayya and the Revolutionary Hell Yeah, provided some contrast with their psychedelic, folky vibes and lyrics about having a rock in your shoe or a dead phone.

By the end of their set, my phone was dead. I caught eyes with an acquaintance I hadn’t seen in over a year, and we made small talk, paced out by periods of awkward silence with our hands in our pockets.

Then, the opening, sliding guitar riff for the Downtown Boys’ song “A Wall” filled the spaces between people in the room, growing and wrapping around us. Frontwoman Victoria Ruiz—looking like the gothic goddess of white imperialists’ nightmares decked in dark velvet and a black veil—began with a spoken word piece:

“Sometimes you must find something new
Something maybe you’ve always had
But now you’ll finally use it
To cut, to bite.”

The full band came in—guitars, drums, and saxophone together. One of the great ironies of punk is how often the ideology in lyrics, something so integral to the art, is often lost beneath fast, screamed vocals. However, Ruiz’s lyrics came through clear without losing any energy or passion.

Often, a frontperson is described as “prowling” across the stage, and while in terms of movement this may have been true of Ruiz’s performance, there was nothing predatory about her presence. She was actively inclusive throughout the show, frequently handing the mic to audience members to join her in sharing a message of love and self empowerment. Mid-performance, she stepped offstage, wrapped an arm around my shoulder, and handed the mic to me.

“A WALL IS A WALL. AND NOTHING MORE AT ALL.”

Inclusion was the overwhelming theme of the night. Activism is not just about speaking up for others (which, as a law student and an experienced organizer, Ruiz does exceptionally), but also about knowing when to step back and allow others a platform to speak. Guests from local organizations took to the stage. A spokesperson from St. James Infirmary—an organization that provides peer-based health and self-defense resources to sex workers—spoke as band members walked through the audience with an open guitar case to collect donations from the audience. Representatives from the San Francisco chapter of the Democratic Socialists of America informed the audience about what they can do in regards to tenants’ rights, through votes and organization, to make Bay Area housing more affordable and without discrimination against undocumented immigrants, people of color, or any other group that faces housing discrimination. A friend of Ruiz performed a spoken word piece about her identity as a Latina from San Fernando, and what that identity means today.

“White people make money.
The rest of us make love, and friends, and connections,
And that’s all that’s going to be left after the f***ing
apocalypse.”

The success of the Downtown Boys’ music has given them fans and a platform, and they’ve used this privilege to amplify the voices of others. Ruiz stood to the side, humbly and lovingly, as each person spoke about their organization and shared their experiences. The show was a flow of empowerment for direct action and self-love. Each speaker was an eddy in which we were swirled and stirred with new information on ways we could make change, and the music, vibration, and lyrics of the Downtown Boys was the high-velocity, supercritical flow that surged us all forward, providing the movement that is necessary for action. Ruiz continued by reciting more spoken word before the next song.

“Never light yourself on fire to keep someone else warm.
You will burn it out, and it may happen slowly,
but you will burn out and you’ll both be left in the cold.
Remember, you can also use that energy to be the river that pushes
through the mountain
To get to the other side.”

Then there was the pit. It started out violent and I was slammed to floor. The three men had made it clear that I was not as strong as them, and I was not welcome. My teeth rang and my jaw throbbed.

I looked around at the overwhelmingly femme, queer, and POC audience who stood at the fringes of the circle. Though it wasn’t spoken, we all agreed that this was not the energy we were going to have at the show. Collectively, we jumped in and started dancing, spinning, and singing together, overwhelming and diluting the violent energy that attempted to take over. Together, we all decided what kind of show we wanted this to be. I like to imagine that the band was proud of us, as they played their song “Violent Complicity” and watched us dance together.

“…And we’ll be loud
Until the table comes crashing down.”

The first time I heard the Downtown Boys was in high school, when I found their song “Monstro” at the end of a riot grrrl playlist. I was struck by the building of energy and tensions that begins with the sax and breaks with Ruiz’s vocals in the chorus, full of pride and power as she screams:

When that song broke out, I saw Ruiz stretch out her hand and pull a girl onto the stage. Then another, and another. The members of Deseos Primitivos and Mayya (of the Revolutionary Hell Yeah) joined too. Their sax player jumped into the crowd and leaned in just inches away from my face. Ruiz reached out and continued to pull more and more people onstage—Latina women with buzzed hair and piercings, queer youth, and even Ruiz’s auntie all danced onstage and all screamed together:

By the end of the show, I didn’t feel alone. And I knew that the next day, having been smothered in sound, community, and ideology, I would be able to bask in the afterglow of ringing ears and post-show euphoria that makes me feel strong and empowered—feelings that I often find hard to come by.

I didn’t think such an immense amount of energy could ever simmer down and bring the show to a close—I couldn’t imagine how anyone could put a lid on this boiling pot of empowered diversity. At the end, Ruiz simply thanked everyone for coming, thanked the opening bands, and thanked her mom and aunt for bringing homemade baked goods. She placed a Tupperware container of cream puffs, cookies, and cupcakes onstage and stepped off.