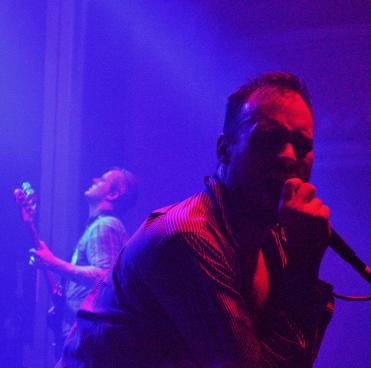 Can Hardcore Have Keytar?

On Friday, August 23rd, at the new August Hall at 420 Mason St., amidst the former and current flop hotels of Old Tenderloin and the gilded contradiction that is currently our beloved San Francisco, four diverse bands cranked out (or keytar-ed out, but more on that later) the jams. Headlined by the grindcore-turned-new-New Wave North Bay natives, Ceremony, the eclectic roster, while a bit jarring, provided a revue-style lineup that rotated through scenes and styles. 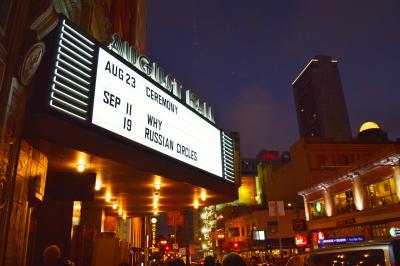 Renamed after the building’s original 1890 architect and opened only in April of last year, August Hall takes the place of the former (and I suppose legendary in its own right) EDM dance club, Ruby Skye. The stomping ground of early-aughts DJ luminaries such as Paul Oakenfold and John Digweed (along with the puked up remains of countless Red Bull & vodkas), Ruby Skye’s weirdly polarizing presence is no more and in its place - restored, renovated, and a bit dazzling - is the Art Nouveau Riche playground of August Hall. (Photog. Nick Tietjens)

For most of the night, the gathering crowd, bathed in eerie blue lights and half-obscured by the constant chugging of August Hall’s many fog machines, seemed intent on tearing it up. Mosh pits formed and dissipated, responding weirdly to whatever was happening on the stage (this reviewer has seen a lot of shows but never a raging pit circling to a keytar… again, more on this later).

The show opened with the Salt Lake City dreampop outfit Choir Boy. Then the lineup took a hard right turn into the solo incantations of KALX-favorite Marissa Nadler, who bravely stood in front of the belligerent masses alone but for two guitars and a loop pedal. After Nadler, the crowd ate up the classic hardcore of Rust Belt denizens, Pissed Jeans. Maybe it was all the fog going to my head (the press pit was directly in front of one of those machines pumping artificial plumes of San Francisco’s most famous natural feature continuously into my face) but at the end of the show, Ceremony’s claim as headliner became dubious at best.

As the evening wore on and the shiny new August Hall overflowed with the sweet stink and crinkle of bio-plastic beer cups underfoot, the pot/pit built to a roiling boil. The whole thing seeming to crest during Ceremony’s penultimate song when one, and then another, crusty black Converse was tossed high up into the center of the gyring crowd. At the end of all, I looked for the poor soul who was raging too hard for shoes but I never spotted them.

But back to the beginning…
To call Choir Boy a nostalgia act doesn’t quite hit the mark but suffice to say, they sound like Stranger Things was thrown into a blender with early New Order and Morrisey at his most falsetto. Lots of ballads and synth-heavy crooning. There was even a throwback saxophone solo. Clean and precise with  tsunami-sized waves of reverb, they sound like the perfect soundtrack to some forgotten teen melodrama from 1985. And they did sound perfect. 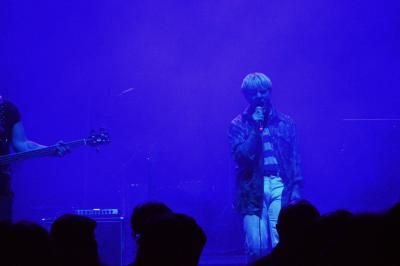 Their set was shockingly tight and flawless, one of those performances that could have been Milli Vanilli-ed for all we knew.

Although their back catalog isn’t very deep, Choir Boy made their way through their only LP, Passive With Desire, and what seemed to be a few new songs. Their sound is so uniform however, it became hard to distinguish between numbers as they lulled us all into a woozy, unfocused haze of vaguely Eighties dreaminess. Which, let’s face it, is the sound du jour. See: Clairo, Com Truise, and an overflowing trough of other neon-clad scenesters. Despite that, in the week that followed, I found myself listening to Choir Boy’s single album far more than any of the other artists who shared the marquee.

Right on the heels of this most trendy (yet not displeasing!) synth overdose, came the ethereal presence of a solo Marissa Nadler. Never quite emerging from the low lighting and ever-present fogginess, Nadler stood before us like a spectre. A spectre ignored, guffawed at, and
talked over by a good third of the audience.

Backlit in a black satin slip, Nadler's gothic outline became the sole visual accompaniment to her decade-long collection of songs about estrangement, loss, and heartbreak. Occasionally dropping gracefully to tweak a loop pedal as she built melodies and choruses in real time, Nadler stood still and played over the din of the raucous crowd.

Nadler’s quietly powerful standouts such as “Watch the Time” and “Blue Vapor,” off her new album Droneflower, wowed more than the aggro-theatrics and New Wave flash (such as the aforementioned keytar, which I swear I’ll get to in a minute) of the bands which followed her. Near the end of her set, in a moment of grace, she asked, “Are you guys ready for a dance party after all this sadness?” 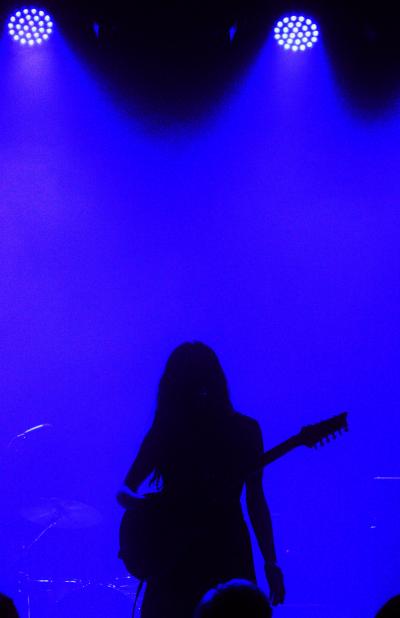 She may have been miscast for the lineup (to continue with the Eighties references, it was like Kate Bush playing on the same bill between A Flock of Seagulls and Bad Brains), but for those who chose to listen and reverently soak it up, Marissa Nadler put on a Show, capital S. 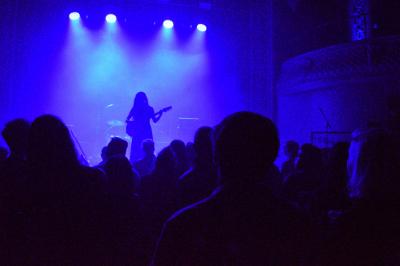 What was in that beer? Am I even here right now? What is happening? Nadler’s set provokes strange questions. (Photog. Nick Tietjens)

The interim between Nadler and the, well, pissiness of Allentown, PA’s Pissed Jeans marked a dividing line between two distinctly different concerts. Nerds v. Punks? Or maybe Crooners vs. Screamers? As stagehands moved mic stands up front and the bar got slammed in the back, a smattering of bruisers in studded denim vests began to advance forward into the crowd. The air took on the distinct, prickly scent of testosterone and shitty beer. A hulk moved directly in front of me, bedecked in steel studs and denim, and I looked down to see a carefully stitched patch on his back which read, “EXTREME MUSIC FOR EXTREME PEOPLE.” Indeed. And with that, Pissed Jeans took the stage. 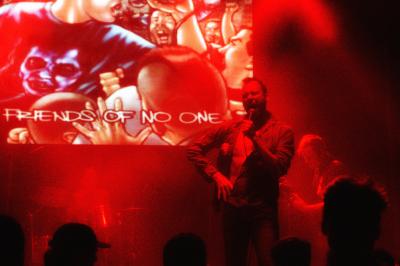 Hailing from the post-industrial Northeast, Pissed Jeans comes to the West Coast with a certain kind of hardcore authenticity generally not found in these parts. All graduates from the same high school, Pissed Jeans (née Unrequited Hard-On… yeah, these guys really know how to name a band) have been playing sludgy, classic hardcore punk for fifteen years. Their shows have been reviewed in the New York Times and their most recent album, 2017’s Why Love Now? (produced by No Wave legend Lydia Lunch on SubPop records), received favorable reviews from Pitchfork, Spin, AllMusic, and PopMatters. Which I’m guessing means f*** all to these guys.

Advancing onto the stage with his chest out, singer Matt Korvette said “We don’t have a new album, we have nothing to show for ourselves… this isn’t even our equipment.” That was his only preface. Rolling through strangely modern and 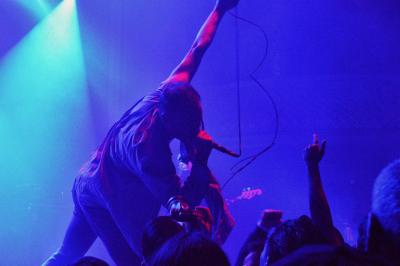 Matt Korvette tells us all off. We deserved it. (Photog. Nick Tietjens)

insightful vitriol like “Ignorecam,” “It’s Your Knees,” and “Have You Ever Been Furniture”--- songs about creepy guys, fetish webcams, and the mundane life of menial labor, Pissed Jeans proceeded to metaphorically curb-stomp the crowd. Korvette screamed and tore at his shirt, working at it until it was a sweaty mess of shredded fabric. 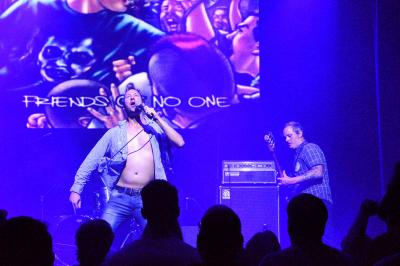 And then it was over and we were left to lick our wounds in silence until Ceremony took the stage. When the lights finally went down and we all gathered close to get a good look...we were greeted with a white keytar.

Very likely, some of the high school nogoodniks who raged in parking lots back in 2010 blasting Ceremony’s Rohnert Park—are now bringing their kids to preschool, nevermind those who happened to stumble across Violence Violence all the way back in 2006 (the Terminator was still Governor! Dick Cheney had just shot that hunting buddy in the face!). Over such a long period of time, it’s natural for artists to evolve. But a keytar! Clearly, we needed to adjust our expectations.

Their sound has steadily shifted over the last few albums and as a live act, Ceremony now seems torn between the hardcore energy of their early releases: the sound that had them touring with bands like AFI and Converge, and a more mature, less outwardly aggressive style. Their new album, 2019’s In the Spirit World Now, is pervaded by synths and a clean, precise machine-driven drumming ala TR-808. Ceremony seem now more Tubeway Army than hoodied chavs. 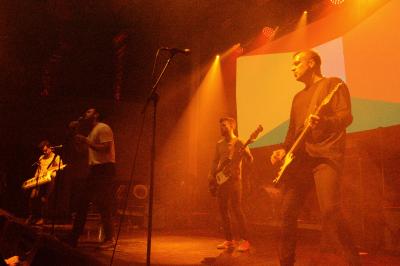 New cuts such as “Turn Away the Bad Thing” and “In the Spirit World Now” dominated their set. They also included an honest-to-god cover of Gary Numan’s “Cars” played note for note in, what I’m guessing was all seriousness. Let me say, watching a confused group of stout white guys trying to start a pit to the wailing synth lead of that song, unsure of themselves but trying really hard to just go with it, was… memorable. Ceremony also cleverly seeded their set with mosh-friendly thrashings designed to check off the ‘Rage Now’ boxes, such as past album openers “Hysteria” and “Into the Wayside Part I/Sick.”

Like mosh fertilizer sprinkled over the front rows, these old ragers periodically turned the floor into a hell-pit of limbs. Stage divers climbed up, over, and back out into the crowd. Beers were tossed up above the roil out of sheer joy. And then out came the synths again to cool it down.

The ghost of that white keytar, which really only appeared in the first third of the set, held sway over this reviewer’s impression of the night. Can hardcore have keytars? Or is a keytar the most hardcore thing ever? Can a keytar ever be more than the most blatant of Eighties jokes? Is this just trying to stay relevant in a retro-dominated scene? 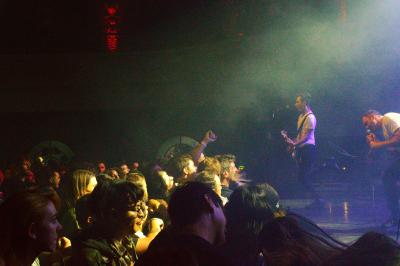 Caveat/Disclaimer: Cultural gatekeeping isn’t cool and is kinda boring and all artists are allowed the freedom to experiment–but out on the floor, I did overhear the word “keytar” passed back and forth in hushed, incredulous tones more than once. Take from that what you will. Off-hand, the keytar is an amazing instrument, but you can’t ever quite escape the inferences and associations it shares with thick schmaltz, the overpowering cheese ...

But the show is over, the album is made, the keytar is mercifully back in its case and the fog machine hangover has mostly abated. So here I am backseat driving this show and judging a genuinely good performance based upon an instrument. What an asshole. It’s like that old Andy Warhol quote, something like, “don’t think about making art, just get it done” and more than anything, last Friday night, Ceremony, Pissed Jeans, Marissa Nadler, and Choir Boy all got it done. 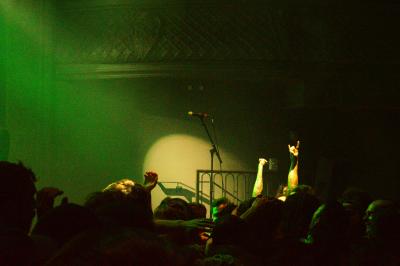