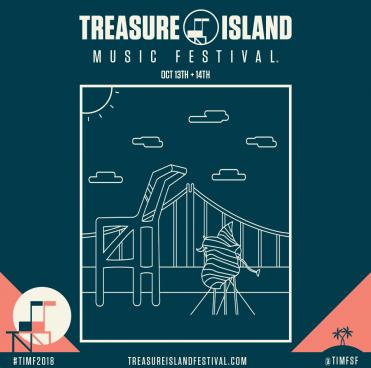 Looking to spend 20 hours next weekend head-banging to an amalgamation of boundary-pushing hip-hop, dance, and indie artists? Treasure Island Music Festival (TIMF)—a two-day festival occuring on October 13th (Saturday) and 14th (Sunday)—is one step ahead of you.

Every year since 2007 up through 2016, Treasure Island Music Festival has been pulling and meshing together renowned artists from all corners of the genre spectrum. The festival is consistently well-loved for its eclectic two-day format—one day dedicated to hip-hop/rap and electronic/dance, the other focused on rock and indie acts. From noon to 10 p.m., each day features non-overlapping acts performing on two separate stages, named The Town and The City. In the past, TIMF has featured such popular artists as Deadmau5, Belle & Sebastian, Modest Mouse, and Death Cab for Cutie. In addition to a diversely curated selection of musicians, interactive art exhibits and roaming performers amplify the festival experience.

Following 2015, TIMF was forced to leave its beloved birthplace in San Francisco’s Treasure Island, leading to a year-long hiatus in 2017 as the search for a new home continued. From this year on, the festival will be regularly based in Oakland’s Middle Harbor Shoreline Park. As the name suggests, the park offers stunning views of the shoreline and the San Francisco Bay, making it the perfect new home for TIMF.

Check out the full performance schedule for information on set times and transportation at treasureislandfestival.com.

Thanks to Giant Noise for the press pass to cover the festival! Stay tuned for our review.