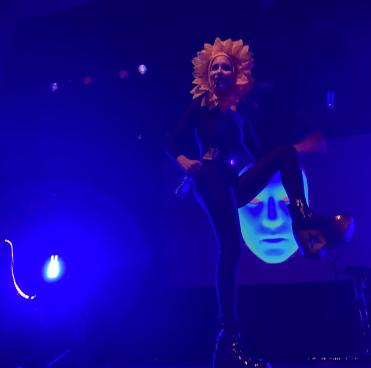 Photos and Review by Jane LaBash.

On Oct. 28, the Friday before Halloween, synthpop duo Magdalena Bay took the stage at the Regency Ball in San Francisco in costume. Mica Tenenbaum was flower headdress-wearing Peter Gabriel and Matthew Lewin was Riker from Star Trek. Known for their strong online presence, chatting with fans frequently on discord and livestreaming production sessions, the duo delivered an engaging concept performance bringing the crowd on a journey to teach a robot, Chaeri, how to be human. Concertgoers, many in their own creative costumes, danced and jumped all the way through the lively and energetic hour and ten-minute performance. 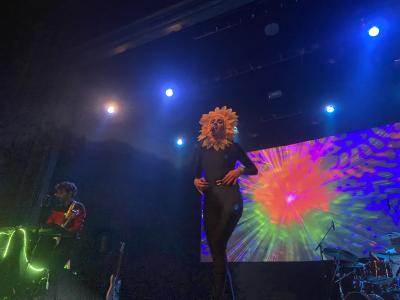 On the heels of their 2021 release of the full-length LP Mercurial World, Magdalena Bay’s performance delivered a comprehensive setlist and well-choreographed storyline that allowed for an engaging show. Following a rather robust setlist, the duo performed song after song, stopping only to interact with the robot Chaeri, whose face was projected on the screen behind them. They mainly stuck to songs from Mercurial World like “You Lose!” and “Dawning of the Season,” but also tapped into earlier hits like “Killshot” (which experienced virality on Tik Tok) and “Venice.'' Every song they played was intended to teach Chaeri about human emotions, in the hopes that Chaeri could one day become human. This running plotline culminated in the reveal of a robot with a tv screen for a face in the corner of the room, that was Chaeri in her humanoid form, showing that the songs had worked.

Magdalena Bay’s music has both a nostalgic and futuristic feel. Their songs feel like they exist  in some kind of liminal space, yet their stage performance contrasts that idea with a warm and energetic presence. I personally had never been to a concert with such an extensive plot. The viewing experience went beyond a simple concert formula and veered into a sort of science fictional play. The two were not just simply playing one song after the next, they were putting on an orchestrated show. The performance was layered with many storytelling techniques that created a fullness to the show. When speaking in between songs, Tenenbaum used a hostess-style tone that made it feel like she was an otherworldly tour guide in this imagined world, where robots like Chaeri hope to be human. 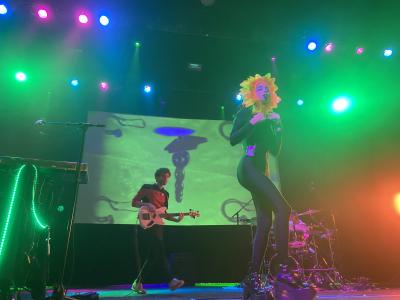 The duo felt like, at times,  caricatures of themselves which tracks with the way they present themselves online. In a time where fans often feel so connected to the intricacies of their favorite musician’s personality, it was somewhat refreshing to engage with Magdalena Bay as a performance piece, not a tell-all.

Culminating their three song encore, they played the last track on Mercurial World, “The Beginning”, which was a perfect send off and emblematic of the cheerful atmosphere they had constructed. Everyone in the Regency Ballroom was bouncing up and down to the repeating lyrics “So if you feel low/ Sit back, enjoy the show,” which was a twist, singing a song meant for the start of the show at the very end, but it fit perfectly into the wacky and winding narrative they had told. The emotional release of relaxing, sitting back, and enjoying the show was exactly what they had provided, without having to say it until the very end.
Jon The Reptilian
DJ Profile / Recent Show Playlists
9:00am to 11:30am
This Week's Schedule
> See More