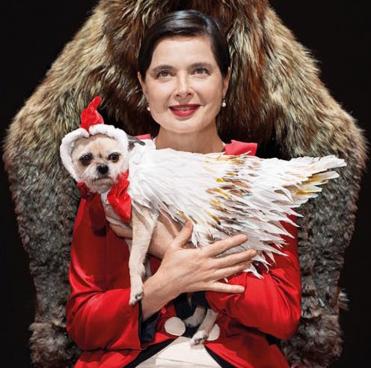 Link Link Circus, a new “theatricalized lecture” is a comedic and scientifically informed look at the links between humans and animals, via Darwin’s theory of evolution. The show is illustrated with Rossellini’s short comic films, home movies, and animation. Rossellini transforms herself into Aristotle, Descartes, a medieval theologian, and other helpful thinkers of the past, while her dog Pan plays various animals, assisted by puppeteer and animal handler Schuyler Beeman.

Isabella Rossellini grew up in Paris and Rome. She made her cinematic debut as an actress in 1979 in the Taviani brothers’ film Il Prato (The Meadow) and has appeared in numerous other films, including the American features Blue Velvet, White Nights, Rodger Dodger, Cousins, Death Becomes Her, Fearless, Big Night, and Joy. She has worked with wide-ranging directors including Robert Zemeckis, David O. Russell, David Lynch, Robert Wilson, Taylor Hackford, Marjane Satrapi, and Guy Maddin.