Interview with Say She She 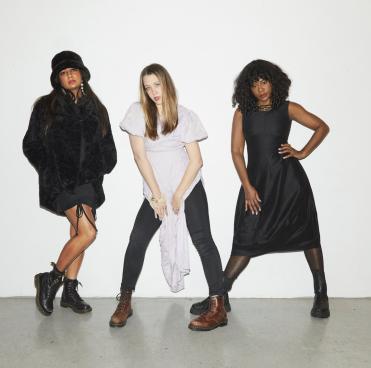 Tune in on Friday, November 4th @ 12:30PM to hear Pacifica speak with Nya, Piya, and Sabrina of Brooklyn based discodelic soul band, Say She She, ahead of their upcoming SF show at Rickshaw Stop on November 14th.

Named as a silent nod to Nile Rodgers, Say She She (C’est chi-chi!: It's Chic!”) will transport you with their dreamy harmonies, catchy hooks and up-tempo grooves.  Pulling sounds from every corner of their record collections, Say She She is a multi- dimensional, multicultural, multi-instrumental, collaborative melting pot. Think Donna Summer meets The Rotary Connection with a sprinkling of Asha Puthli backed by members of the Meters.

The band's sound is a hat tip to late 70’s girl groups with the three strong female lead voices of Piya Malik (El Michels Affair staple feature, and former backing singer for Chicano Batman), Sabrina Mileo Cunningham and Nya Gazelle Brown at the epicenter of a roaring roster of musicians including former members of the Dap-Kings, The Extraordinaires, the house band at Ronnie Scotts and members of underground cult-funk band Orgone.