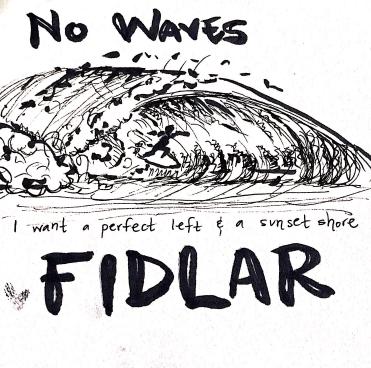 Transcribd and illustrated by Kat Cone

Alright, so the first question I have for you is something I’ve actually been dying to ask since the first time I heard your self-titled album. So, in your song “No Waves” you say “I want a perfect left and a sunset shore.” So I just wanted to ask, do you surf goofy foot?

Zac: It sounded better than “a perfect right”, you know? I thought about it, and well, every time I think about it I feel like a fraud.

That’s okay, I feel like the majority of the listeners wouldn’t know.

Zac: You’ve gotten that out of the way, that’s good. 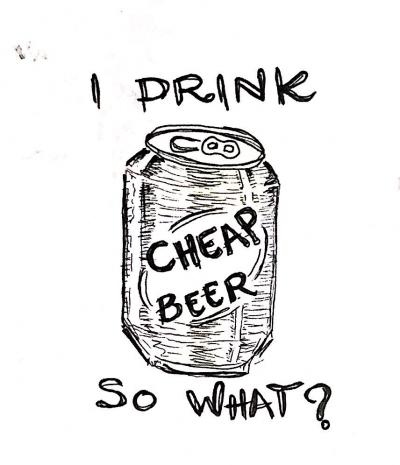 Zac: Usually whatever’s at the venue.

Nice. Also, a couple weeks ago, I interviewed Culture Abuse and I heard that you guys did some Clash covers together. That’s pretty cool.

Zac: Yeah, yeah. Those guys are the biggest stoners in the world. The funnest part about working on that Clash cover with them was just hearing the in-betweens of what they say to each other. Like, “Woah woah woah what? Sick!” I was just like, woah, this is totally like a Jay and Silent Bob kind of thing.

Amazing. Which song did you guys cover?

Zac: “Police On My Back”, but then I thought they said “Police and Thieves” when they hit me up to record that, and I said “Ah sick, let’s do Police and Thieves!” They didn’t correct me, you know? Then I got to studio going, “Dude, alright, do ‘Police and Thieves!’” and they said, “Ah no, ‘Police on My Back’” and I was like “Aww man!”. But it’s cool, I love that song too.

Yeah they’re both good ones.

Zac: Yeah, they’re great. It was super fun. We just did two days in the studio, just for fun.

That’s awesome. And they seemed like cool guys when I talked to them.

Also, a fellow DJ wanted me to ask if you know Sean Arenas and Ray Cruces from Pinned in Place?

Zac: Woah, I know Ray and Sean. I haven’t heard those names in a while.

Yeah, we had them here at the station back in June, I believe.

Zac: Wild, wild. What was their band called?

Zac: Yeah, I know that they’re like brothers or something like that. Ricky and Ray? They’re in a lot of bands.

Alright cool. So how’s the tour going so far?

Zac: But it’s good. Just one gig after another and we’re trying not to burn ourselves out by partying too much.

Zac: It’s like the only job in the world where they give you a bunch of alcohol and then say, “Okay, go do your job now!” It’s just so weird.

I bet. Also, I’m particularly excited about FIDLAR’s upcoming album Almost Free that’s going to be released in January, especially after listening to the singles that were released from that like “Alcohol” and “Can’t You See”. So my question is, when Too was released, there was a lot of hype about the band transitioning from a so-called party punk sound to songs that are a bit heavier and with more personal lyrics. And then when I heard one of your new singles, “Too Real”, transitioning into a more socially conscious direction, because the lyrics were tackling a lot of political issues that really stood out to me, and I think that’s a really interesting development in the band’s sound and what FIDLAR stands for. Is there any sort of meaning or intention behind that?

Zac: But I think it’s super easy for people (well I mean, it’s kind of our fault too, we have a song called “Cheap Beer”) to label us as a party punk band, but the reality is we work pretty hard at what we do. We’re constantly touring and on the road, and I think the new songs show a reflection of those two sides of us. Like, having a song called “Alcohol”, which is about alcohol, and having “Can’t You See”, which is about L.A. vibes, and “Too Real” was mainly like, being able to tour and meet a bunch of people, and just seeing everything, you know? We weren’t consciously like, “Let’s make a political song.” It’s just mainly taking in everything that’s happening and just saying it, just taking a thought-mouth approach to it. So what I’m trying to say is that we don’t really think of these things, but it just kind of happens, you know?

Yeah I get that. So I’ve always been intrigued by some of the hints of blues and blues rock influence in FIDLAR’s sound, which especially came out in some of the songs on Too as well as some of the song that have been released from the new album, and in some of the acoustic sets that you guys have done, including a cover of the Rolling Stones’ “Dead Flowers”, which I thought was a cool, interesting choice. I know that as a punk, you’re kind of supposed to resent classic rock, but I for one grew up listening to my dad’s classic rock and I remember playing my fair share of [Rolling] Stones, Cream, and Black Sabbath covers when I was eight years old and first learning the guitar. At least for me, I’m not going to deny the early influence that those kinds of bands had on me. Is there a similar vein of thought going through FIDLAR’s sound and songwriting process?

Zac: Yeah, I think that I don’t have control over what influences or inspires me, whether it’s blues or blues rock or hip hop or classical, whatever it is that inspires you. I think that’s the problem with punk music now; it puts a ceiling over things, but to me that’s not what it’s about. To me, it’s about freedom, you know? And putting no boundaries and no rules on stuff. But humans in general try to give everything an identity. If you’re into punk music and that’s what you do, that’s cool that’s you. But us, we’re influenced by lots of stuff, especially the Rolling Stones, especially classic rock, especially Jackson Browne. The song “Cocaine” on our first record is basically just a Jackson Browne cover, you know?

Zac: Yeah, and especially in California and the East Coast, everyone needs an identity… Well actually that’s just everyone everywhere, but punk music, in general, with the leather jacket and spiky hair, that’s  your uniform. I’m from Hawaii, so we didn’t really have that. We had punk bands playing with reggae bands playing with Hawaiian bands all in the same show, and I remember going to my first punk shows in LA in like board shorts or whatever and I remember thinking “Oh no, I’m in the wrong area.” 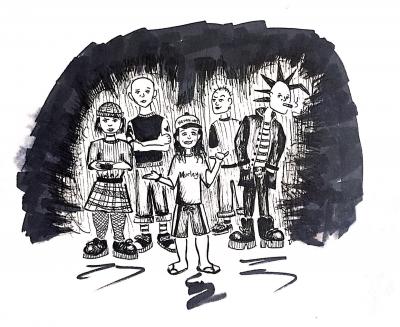 That’s cool, I really like that. So, do you guys have any particularly interesting stories from this tour so far?

Zac: It’s not even because of drinking or anything, it’s just like everything’s so fast.

Yeah I bet. Just constantly going from one place to another?

Zac: Yeah. Oh, we got to hang out in London, before the tour, and my friend Jonah Ray came by and he brought Martin Starr, which was pretty cool.

Zac: Yeah it was pretty tight.

So it was like a FIDLAR-Freaks and Geeks mashup?

Zac: I know, and he’s like the best character too!

Let’s see, so I’m a surfer but since I’ve been going to school at Berkeley I don’t get to paddle out as much. When you’re on tour is there a particular surf spot that you miss when you’re out travelling?

Zac: Ooh, because I’m from the North Shore of Hawaii, that’s what I miss the most. You know, when somebody asks me, what’s the most beautiful place you’ve ever been to in the world, I’m like, my backyard in Hawaii where I’m from feels amazing. But the thing that’s kind of cool about the touring stuff, is that, well it’s a little hard in America, but you know when we’re in Australia I just want to go surfing as much as I can.

Zac: Oh my God, surfing in Australia is so fun, man. And this one time I tried to go to, I think in Austin, to this wave pool thing, and I kooked it. But yeah, I always try to find cool little surf spots.

Zac: Yeah, it’s pretty rad but you know, I wish we were in like a reggae band or something so we could tour in more tropical places.

So, anything else you’d like to say to our KALX listeners?

Zac: Stay in school. Don’t drop out like me.

*laughs* Well I think that about wraps up the questions I had prepared. Thanks so much for talking to me.

Zac: Hey, thanks for having me.

I’m looking forward to hearing you guys play and I’ll get my homework done ahead of time so I can go to the show.