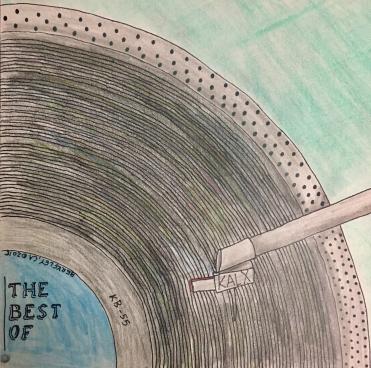 Check out the Weblog's featured design for August 2018.

I’ve spent many nights with this set up: waiting for one song to end, seeing the blinking numbers on the CD player marking the last ten seconds of the song. Carefully placing the needle of the turntable of the record down, hoping to get the song just right. And as the song fades out, I seamlessly fade into my new selection. I step back and breathe a sigh of relief, right before scrambling to queue up the next track.

DJing is both nerve wracking and exhilarating. You become the voice of an exalted radio station in that 2 ½  or 3 hours, with an audience you will never see and most likely never speak to. Yet you know that you’re contributing to a lineage of legendary DJs and playing artists that may change the world of whoever is listening. You can be contributing to a moment, a feeling, or introducing a new artist to an ardent new fan.

Growing up, I really loved playing and listening to music. Every morning, I would put on the radio, finding new artists and trying (and failing) to get tickets to shows. I never thought I would be the DJ behind the mic, playing my favorite songs for an anonymous audience.

Coming to KALX granted me the privilege of not only learning about different genres of music, but also gave me the opportunity to explore with listeners while I DJed. DJing is thrilling, stressful, and educating all at the same time. I wanted to capture that feeling with this drawing, close up to the vinyl trying to get the perfect song to play.

Chandler graduated with a Media Studies degree from Cal and has been at KALX since 2014. When she’s not snuggling pups or cooking, you can hear her on the air as Hella Bent.