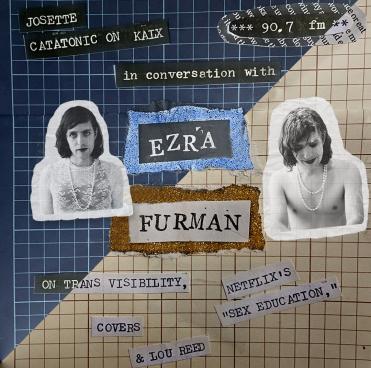 Tune in on Thursday, May 19th @ 12pm (noon) to hear DJ Catatonic interview Ezra Furman ahead of her show in SF at August Hall on May 21st.  Together, they discuss Trans Visibility, the music from Netflix's Sex Education, and Furman's book about Lou Reed.

A singer, songwriter, and author whose incendiary music has soundtracked the Netflix show Sex Education, Furman has for years woven together stories of queer discontent and unlikely, fragile intimacies. She has a knack for zeroing in on the light that sparks when struggling people find each other and ease each other's course. Furman's new album, All of Us Flames, widens that focus to a communal scope, painting transformative connections among people who unsettle the stories power tells to sustain itself.

"This is a first person plural album," Furman says. "It's a queer album for the stage of life when you start to understand that you are not a lone wolf, but depend on finding your family, your people, how you work as part of a larger whole. I wanted to make songs for use by threatened communities, and particularly the ones I belong to: trans people and Jews."