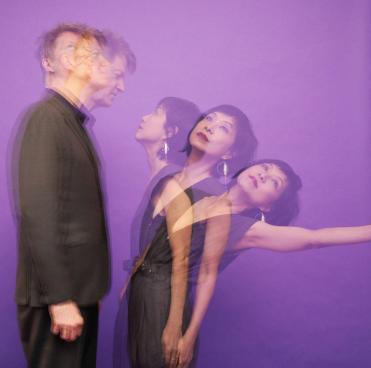 On February 9th, 2020 DJ Velvet Einstein interviewed the duo CUP, composed of Nels Cline and Yuka Honda. Check out the conversation they had below.

Velvet Einstein: I thought we could get started by talking about the origin of this collaboration. You guys obviously have worked together a number of times. What is it that that makes CUP unique compared to performing on each other's projects?

Yuka: It's supposed to be 50/50. Usually we do a Nels Cline project or a Yuka Honda project and then we kind of know who the boss is. And with this one, we pretend we don't know.

So is it anarchy or do you take turns?

Nels: It's fluid. I don't think it's even taking turns so much as intuitively moving forward and then assessing what's working and what's fun and what feels right. Whether that's a balance or not, I don't think is the point.

I think the point is just being happy with the end result and with the process.

At the end of last year, you put out Spinning Creature. What was the composition process like for that?

Nels: It's quite diverse, some of the songs on the Spinning Creature album, I wrote music and said "Hey Yuka I wrote a song, how do you like?" or "What should we do with it?" Certainly that was the case with the song Spinning Creature. We wrote the lyrics together and Yuka went through and really helped me edit a lot of my harmonic information in that song and focus it. So it started out as this kind of more elaborate Brazilian inspired acoustic piece and became a little bit more direct. And I think a lot groovier. And then we wrote the lyrics together.

And then were there other songs Yuka that you started and then Nels picked up from there?

Yuka: I don't think there's any song that I started per se. I usually kind of let Nels start or we jam and...

Nels: Or I foist a song on her.

The pieces that I think are very Yuka are edited and refined versions of improvised pieces, and most of those grooves are things that Yuka would initiate. And then we would just start playing and then she would go back and sift and edit and mix, really pre-mix. And add things sometimes and create this whole other cool piece.

Speaking of a mixing, as you're touring as CUP right now, what is the level of improvisation versus trying to keep to what wound up being on the recording?

Nels: Excellent question. There's a lot of open-ended structure. Whether or not one could call that thoroughly improvised, I don't know.
But definitely we know where we're going, but we don't always know where we're stopping on a lot of these pieces. So I think it's about half wide open and half pretty narrowly focused song-like structures. I don't know. Is that about right?

Yuka: Yeah, I think "fluid" is the right word. We just keep it open and sometimes if we feel like doing something in the middle of the song, we do it and see what happens. It's like a conversation.

And what sort of things would you throw in as a change in the middle of a song?  Are you talking about playing a different sequence that you already have prepared or something completely out of the blue?

Yuka: It's usually some kind of sonic thing that happens. Like maybe I want to turn extra knob or...

Nels: Well, for example, last night we played the "Soon We'll Be Flood" groove, but it had completely different elements in terms of what I was playing. It was very different from the recording. It almost got quieter and ended up in this extended A Minor, rather poignant area that was completely not planned and seemed to have a really profound effect on the audience because it felt very poignant suddenly, rather than just sort of electronic and danceable and psychedelic. It became much simpler, but none of that was planned.

Also when we start the piece called "As Close As That," we begin the piece every night with some very quiet ambient kind of space area. And that's always completely different. We never know how long that's going to go. It might go for awhile, and then we work our way into the piece.

So in that way, I think it's like a lot of things that I've done over the years where I just work open areas into the structure, and then when you hear a certain note or you just feel like enough is enough, you intuitively move together to, into the piece. And that makes for a nice balance of composition and improvisation.

One of the things I was curious about was the song "Berries."  What was the inspiration for that, including the title of the song?

Nels: Well, it came from a poem. I wrote a little poem. Very, very little, and it's just light and whimsical.

And I think it's just a little snapshot of a little personal moment of us eating breakfast. I guess you could look at berries in some larger metaphorical sense, although I don't think I quite was at the time. It's about simple life enjoyment, which I think is sometimes some of the most profound moments.

And then the groove is Yuka's groove. I had these chords, but she came up with the whole groove and then did the whole instrumental. It's primarily instrumental. I don't sing for more than 40 seconds or something. That's all Yuka's world that you hear there. Taken from a long jam that we did in the studio on that groove.

Yuka: I like to imagine that we're eating berries in the morning and it starts very sweet, but we eat these berries and it's just kind of like Alice in Wonderland and we start to hear all these like micro beats and start tripping.

And Yuka, over the years, technology has changed a lot. I'm curious how that's changed your composition and your performance.

Yuka: It's definitely changed incredibly, for example, in the nineties when I was doing Cibo Matto, we were using floppy discs and each song was maybe two megabytes. At the beginning I would use one sample backwards and forwards and layer them and reuse one sample over and over in the songs to save the memory. Those days are definitely over. I can use so much more. Now it's gigabytes and tiny hard drives like thumb drives. So, I can definitely do more sounds per song. But, at the same time, the foundation is the same, it's kind of like grabbing the sounds that I'm interested in and then kind of cook with them.

In terms of the origins of the sound, do you have a go-to place to find the initial seed of a sound?