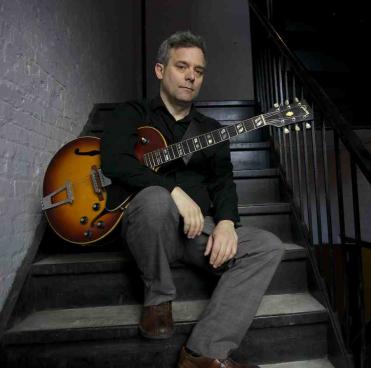 On Wednesday, December 18th @ 3:30PM, The Muse hosts Berkeley native jazz guitarist & band leader, Will Bernard, for a live in-studio interview ahead of his show later the same evening at The Ivy Room in Albany.

Will Bernard, now a Brooklyn NY transplant, studied guitar and piano from an early age with Dave Creamer, Art Lande and Julian White later developing and interest in classical music composition . He received a a degree in music from UC Berkeley where he studied with Andrew Imbrie and others.

He began playing and recording on an international level as a member of Peter Apfelbaum’s Hieroglyphics Ensemble,who made their recorded debut with Don Cherry on “Multikulti” (A&M 1989). Since then, Bernard has participated in a host of boundary stretching groups, ranging from jazz, hip-hop and world music to experimental music, with many stops in between.

Bernard’s last two albums are on Posi-tone records  “Just Like Downtown” (Posi-Tone 2013) which features John Ellis on tenor sax and bass clarinet, Brian Charette on organ, and Rudy Royston on drums and “Out and About” (2016). which features Ben Allison, Allison Miller, Brian Charette and John Ellis. These recordings  demonstrates Bernard’s roots in straight-ahead jazz and more traditional styles as well as funk and free wheeling improv.