Show Review: In The Valley Below @ The Independent on 2/27 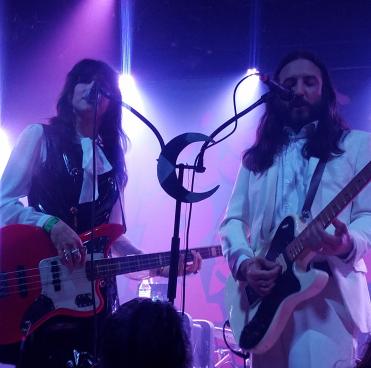 Playing at a sold out show in San Francisco for The Strokes’ Albert Hammond Jr. during Noise Pop week, In The Valley Below knows how to warm up the crowd!

Last summer, I saw In The Valley Below co-headline a show with Tanukichan at Rickshaw Stop in San Francisco—I’d been a fan of their music since their single “Peaches” became a hit. It was a great show and I was thrilled to discover that Angela Gail and Jeffrey Jacob of In The Valley Below were returning to the Bay Area with a bang as part of Noise Pop 2019!

Excitedly, I showed up an hour before doors opened so I could find the right spot to see In The Valley Below up close. While embracing the cold February weather, my fingers were too numb to even tweet on my phone. We finally were let inside in the dark open space of The Independent. Debating whether I should buy merch before the show to beat the lines, I decided to wait it out or else I would lose my front spot. Fortunately, I made the right choice because after their set In The Valley Below was there at the merch table to autograph. I was even lucky enough to get a picture with the beautiful Angela and the dashing Jeffrey wearing his signature white suite!

Before In The Valley Below came on stage, all-female San Francisco band The She’s entertained us with their presence and thanked the audience for arriving early. In The Valley Below let the drummer borrow their drum kit, which I thought was supportive and sweet sportsmanship. The She’s played a short set of ‘60s-sounding psychedelic beach rock and gave the audience a voice to pick their last song through a cheer. “Cherry Red” was the winner! Once they left the stage, intermission music filled the air and the audience dispersed to get drinks and socialize with their peers. After a few playlist songs, the music died down and the bright lights were fixated on the stage. Everybody scrunched up for the second round. At last, Angela and Jeffrey with their drummer Scott took their positions on stage and started their set with “Stand Up,” an energetic song to pump the crowd. It could be the pounding, pulsating drum pedal or Jeffrey’s voice charging with the lyrics of urgency, but something makes you want to jump or march to this song every time.

As they quickly segued to a song from their upcoming release The Pink Chateau (due out April 26!), “Searching For A Devil,” Angela led as she grabbed a chain, shaking it as an instrument. Her seductive voice took control of the song layered in synths and Jeffrey’s mindblowing guitar. Their next three songs were also from The Pink Chateau including “Rise” (a title I feel is a metaphor for the band’s recent resurgence) and “Hold On Tight,” a song about the couple’s son with a lullaby tone. During mid-set, Angela joined Jeffrey on another string instrument—the bass! Angela showcased her own well-rounded musical abilities (other than her voice being a powerful instrument already of course). Angela is a free-spirit: when she sang, her hands also told a story (when not busy on the bass!). Just the sight of her you know she felt the music. She and Jeffrey are a compelling couple, inseparable and completely in sync in their performances; they’re each other’s musical yin and yang. My favorite moments of the show were their duets in which they completed each other’s sentences into their crescent moon mic stand. Also, when they jammed together facing each other it gave a passionate cosmic vibe.

Finally came the song that everyone fell in love with six years ago—“Peaches!” Angela headed to her keyboard while multi-tasking one hand on the keys and the other with the mic as she uttered the first verse. Jeffrey smoothly followed in with the next lyric until they sang in unison “Working on a feeling, breaking down the ceiling…” at which point the audience broke into applause and sang along. Displaying their on-stage chemistry, Angela leaned towards Jeffrey as they sang their hearts and souls into this masterpiece. After those five blissful minutes, they performed their last two songs: an upbeat track from The Belt—“Neverminders”—and then “Bloodhands,” an edgier song from The Pink Chateau with a cool Depeche Mode style intro.
Their thirty-minute set flew by fast. Just like in the lyrics of “Peaches”—‘So let's love for one song’—I wish they stayed on stage longer. In The Valley Below never seem to disappoint me in their dynamic performance. From Jeffrey’s mastery guitar shreds and Angela’s sultry vocals watching In The Valley Below always feel like the first time. In the future when Angela and Jeffrey return to the Bay Area for another show, I’ll be there for sure wearing my In The Valley Below t-shirt!

In The Valley Below are currently touring live. Watch for their upcoming work The Pink Chateau (directed by Angela in Michigan)—an innovative audio/visual concert film experienced through a headset—coming to Alamo drafthouses in April. *The film focuses on a female protagonist exploring her sexual desires.*