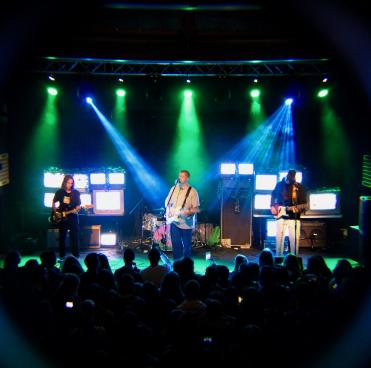 On Saturday, April 14th, concert goers at Cornerstone Berkeley were able to relax and jam out to the chill, upbeat music of Virginia based, alternative rock band, Turnover.

The evening started off with a lively and carefree performance from Summer Salt, followed by the impassioned punk music of Mannequin Pussy before the spotlight was handed over.

Finally, the long-awaited tunes of Turnover began, starting with one of their most popular songs from their newest album Good Nature, called “Super Natural.” The crowd swayed to the melody, letting the serene sound guide their movements. A sense of calm was definitely the defining characteristic of the night’s overall ambiance.

Adding a visual aspect to the show, there were many televisions of different sizes positioned behind the band. Different images flashed across the screens, with psychedelic patterns and colorful animations. One that was particularly memorable was an illustration of neon orange lips that moved in a rhythmic, hypnotizing manner. The colorful, entrancing nature of these images amplified the almost reverie-inducing quality of the show.

Lead singer Austin Getz commented that this was the band’s first time playing a show in Berkeley, which was met with enthusiastic cheers from the audience. The band played many songs from their various albums, including “Sunshine Type” and “I Would Hate You If I Could.”
Good Nature serves as a turning point in their career as a step away from the usual pop punk sound of records like Magnolia and Peripheral Vision, by providing a more relaxed, dream-pop vibe that listeners can fall into.

Despite the mellow nature of their music, Turnover was still able to capture the attention of their audience and maintain their enthusiasm. The tunes allowed the crowd to loosen up, reminding them that “this life is controlled confusion, it’s just a grand illusion,” as described in one of their concluding songs, “Dizzy on the Comedown.” This “good-natured” performance was an uplifting way to spend a Saturday night.