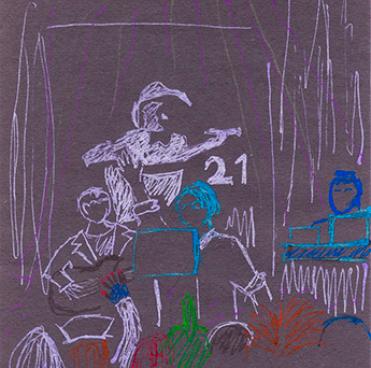 Legendary cold wave band Trisomie 21 graced Oakland’s Uptown on March 14, 2019, as a part of their first North American tour. Volunteer Chandler is here to tell you all about it.

Before the music even started, I was entertained by the crowd; the amount of eyeliner, spikey hair, and black clothing was enough to make Robert Smith a little jealous. But this was no ordinary goth gathering. The crowd was gathered in honor of seminal French cold wave band Trisomie 21, who had come to Oakland on March 14th as part of their very first North American Tour. Longtime fans of this elusive French band descended on the Uptown to see this legendary band live on their turf for the first time.

Following spirited opening sets from synth pop duo Riki and post punk trio Houses of Heaven, Trisomie 21 took the stage and were met with a roar of approval from the audience. Bathed in purple stage lights, brothers Philippe and Hervé Lomprez and their bassist  dove into their set with “Where Men Sit” from their latest album Elegance Never Dies. While their music has diverged from their more angular and experimental sound, they still retained its danceable quality with a driving drum beat and pulsating bass. Philippe raised his hands as he sang, matching the victorious and dramatic pitch of his voice, while the bassist often danced and moved as they delved into deeper cuts, often returning to an experimental punk sound. Although there appeared to be some technical difficulties with the projector, they seemed unfazed by them, as did the audience. As they got deeper into their set, the inhibitions of the audience slowly broke down. Dance circles broke out throughout the venue as lace-laden hands bounced above the crowd. The band made sure to show their graciousness to their thankful audience, often saying “Merci” between songs.

As their set came to a close, the bassist left the stage, allowing for Hervé and Philippe to play from their first releases Le Repos Des Enfants Heureux and Passions Divisées from the early ‘80s. The mood become all the more electrifying, as some sang along and the dancing intensified. A personal favorite of mine was “Il Se Noie,” which had an organ sample similar to a broken toy box tune. It was visceral, dramatic, and almost creepy; I loved it.

Playing a good mix of their classics and newer songs, Trisomie 21 continues to prove that innovation and experimentation in music is both present and very necessary in contemporary music. It was an honor to be able to see Trisomie 21 at their first Oakland show, and, it was definitely a bonus to see the goth scene in full regalia for this sinister soiree. Merci beaucoup, Trisomie 21!

Chandler has been a volunteer at the station since 2014 and DJs under the name Hella Bent. While not digging into endless stacks of vinyl at KALX, she likes drawing, baking, and (attempting to) catch up with new music.