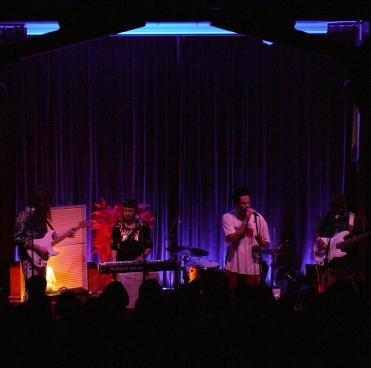 On November 3rd, lo-fi alternative band Triathalon made an intimate appearance with fans to share some smiles and some music. The band was hosted by the charming little San Francisco venue, Swedish American Music Hall, which finds its home between Lower Haight and The Castro neighborhoods.

After two opening sets, the anticipated headliner waltzes on stage. The audience fixates on the groovy sensuality of Triathalon as the band sways to their own downbeat. With furrowed brows and squinted eyes, the vocalist switches to falsetto as if entering a dream state, allowing his subconscious to take over. Each beat vibrates with clean, colorful noise. While more sleepy-sounding than Homeshake and more upbeat than infinite bisous, Triathalon holds true to the lo-fi pop scene that their casual aesthetic indicates.

Their September single-release “Distant” rushes the audience into a contemplative state, with auto-tuned vocals singing “I’m just laying in the deep end” as distorted guitar chord ripples across the soundwaves like a pebble skipping across a calm lake. Layers of intricate harmonies reveal the band’s layers of musical confidence. Soundboard-mixed beats balance “Courtside” with chilling vibrations, as the venue sinks into an artful abyss of psychedelia. The stage sits a few feet above the audience, barely raising the band above the audience’s eye-level. With string lights draped across the ceiling and a deep red velvet curtain as the backdrop, Triathalon basks in this Hollywood-esque framing.

Triathalon indulges the audience with new material, which is just as well orchestrated and groovy as the music their fans already know and sing along to. The vocalist rests his lips on the microphone, humming into it while sensually caressing the stand like a woman’s body begging to be touched. The band vibes out to their respective instruments, collectively putting together fleeting melodies and transient beats. As for the audience, we are just passer-bys visiting their dream world.

Subtle fuzz emanates from the amps; Triathalon sounds pre-recorded and retro, like a dusty vinyl revived for another listen. But their dream pop turns the venue into a parallel universe where the audience is suspended in a infinite listening trance. Blurry synths trickle down the starry soundscape the band creates, while swooning vocals drip like thick honey. Triathalon’s funky low-fidelity music may seem easy to mimic, but the four-piece band’s candid attitude and effortless talent is unmatched.