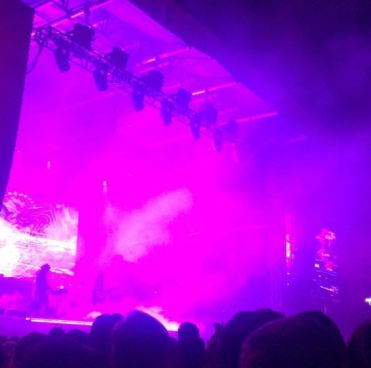 For a decade, Treasure Island Music Festival has been the site for artists from all corners of the genre spectrum to unite. It has consistently held an unique two-day format: hip-hop/rap and electronic/dance acts on Saturday, rock and indie artists on Sunday. From noon to 10 p.m., each day featured non-overlapping acts performing on two separate stages, named “The Town” and “The City.” Set alongside beautiful expanse of bay with softly shored skyline views, the festival featured a plethora of booths selling posters, clothing, drinks, and other merchandise, including a craftwork booth where you could make your own buttons, flower crowns, etc. From peculiar art sculptures to people traveling around in outlandish, grotesquely insectoid costumes, Treasure Island kept you on your feet and constantly confronted with the bizarre.

The highlights of Saturday’s performances all occurred on the ample stage of The Town between a span of four hours; these included soulful art-pop artist Moses Sumney, Australian R&B band Hiatus Kaiyote, and eclectic pop singer-songwriter Santigold. Taking the stage at 2 p.m., Moses Sumney astounded with his exquisitely shrill falsettos and dramatic performative antics. Accompanied by a guitarist and a violinist—seated at either corner of the stage and all outfitted in black—Sumney’s set was intermixed with guitar-heavy R&B and stripped-down, keyboard-centric soul-pop. His understated sense of humor brought out the contrast between his soft, baritone speech and the airy soprano quality of his singing voice in a charming manner. 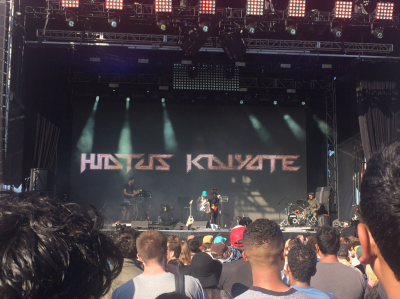 Nothing was more eclectic, however, than Santigold’s carnivalesque performance, as was apparent right from the start in the vibrant set-up of the stage—complete with large pink pom-poms and yellow confetti trees. Adorned in a provocative red cloak plastered with plastic bottles, dollar bills, and green patches that protruded like tufts of grass, Santigold (Santi White) delivered her sassy, artfully robotic vocals against electronic, reggae-infused hip-hop instrumentals. She played off the crowd’s excitement by calling a group of audience members to dance on stage with her and her female white-clad, poker-faced backup dancers.

Sunday started off strong at noon with Josiah Wise—the experimental neo-soul artist behind serpentwithfeet—opening at The City. What the intricate layering of his music does not reveal about his newness as an artist, his performance endearingly did. Switching off between his keyboard and playing instrumentals off of his laptop, Wise showcased his gospel-like voice and immense capability for riffs with a sense of intimacy. In addition to tracks from his debut album soil, he played a couple of thematic songs—about grief, for instance—often breaking into speech with a tinge of humor.

Wise was followed by neo-psychedelic group Pond at The Town, fronted by the incredibly animated Nick Allbrook. Along with his glamorous dance moves, the former Tame Impala bassist repeatedly jumped off from the stage to mingle with the audience, dramatizing his exquisitely acidic vocals. Pond were like an amped-up, energized Tame Impala, complete with Jay “Gumby” Watson’s fuzzy guitar riffs and James Ireland’s groovy drumming.

The most energetic act of the day by far, however, was Shame, playing tracks off of their debut album Songs of Praise. A quintet of South London schoolboys, the British post-punk band created a snowballing force of rageful intensity with Charlie Steen’s bellowing vocals and Sean Coyle-Smith and Eddie Green dark, escalating guitar melodies. Alongside Smith and Green’s whirling physical antics, Steen complemented his provocative, conversational repartee with vigorous arm-pumping, shirt-ripping, and stage-diving shenanigans. 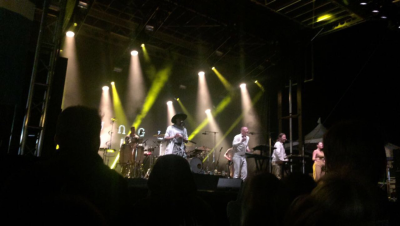 The afternoon unfolded with of a number of notable indie acts, including badass indie dream girl Courtney Barnett and the hauntingly sensual Cigarettes After Sex. The highlight of the mid-afternoon indie sets was certainly U.S. Girls. Although U.S. Girls is solely the experimental indie pop project of American-Canadian musician Meghan Remy, Remy and her crew of musicians—including another female singer, a keyboardist, two guitarists, two percussionists, a bassist, and a saxophone player—coalesced seamlessly to create a theatrical experience, characterized by the melodramatic, performance art-like dances of Remy, her fellow singer, and her keyboardist. Remy’s airy, dulcet vocals drifted among elaborate, experimentally jazzy/psychedelic guitar solos, transforming her dark glitchiness of her recorded albums into a climactic funk extravaganza.

After nightfall, the evening saw a less dramatic but more buoyant funk extravaganza with Jungle. The British funk band is well-loved for their spectacular live performances, and they certainly exceeded all expectations, playing track after track off their recently-released album For Ever. Fronted by their four (mostly white-clad) vocalists and backed by their two percussionists and bassist, Jungle compelled the whole park into a swaying groove with their bouncy rhythms and warm, choral falsettos. The compulsion of the beat was lost on no one; even people all around the outskirts of the crowd were standing on benches and dancing to their heart’s content.

At 8:25 p.m., the crowd rushed from one blockbuster act to another as they swarmed to find a good spot at The Town for the legendary Tame Impala. The Australian psychedelic/indie rock group did not disappoint; the crowd hummed along as they turned out hit after hit (along with some underappreciated B-sides) of their signature stoned-out haze. Every couple of songs was punctuated with improvisational instrumental interludes, while psychedelic stage effects aptly transformed the festival atmosphere into a smoky laser-filled light show—a transcendent close to a wonderfully eclectic weekend.