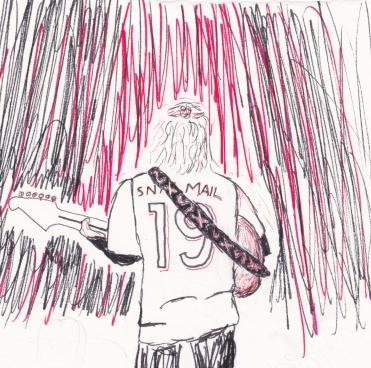 Indie rock band Snail Mail returned to San Francisco for a sold out performance on January 24th. To mitigate your FOMO, check out Chandler’s show review!

There are times when you see a band with a hundred expectations and others when you have none. It happened to be the latter case when I saw Snail Mail at the Fillmore on January 24th. I marched up the Fillmore’s blood red staircase into the chandelier-decked lobby expecting the concert openers Choir Boy and Black Marble to be my favorite parts of the show; anticipating that I’d end up writing about them as “underdog” acts assuming the spotlight. But instead I was dealt something unexpected.

I walked into the cavernous hall to Salt Lake City-based Choir Boy already onstage. Under the somewhat stark stage lights, singer Adam Klopp belted out melancholy prose with an impressive power as the moody, synth-heavy  pop carried throughout the venue. While I’m a huge fan of their music, I wasn’t sure what to make of their playing with Snail Mail; while the lyrics are deeply personal, musically it doesn’t quite match up. Regardless, it was a pleasure seeing them again.  A woman was crying as they departed and that seemed a sign of a good set.

Black Marble, the formerly-Brooklyn-now-LA-based coldwave project of Chris Stewart took the stage next under smoky, ominous lighting. Stewart greeted the crowd with an altered voice and proceeded to plow through their set. This got the crowd moving to the driving bass and drum machine—which were both lively and mechanical—while both members of the band stood stoically in their posts. While I enjoyed their set, I felt that the drum machine didn’t translate super well through the sound system and made the songs somewhat indiscernible. As someone who has seen them live before (sounding much better), I was bummed the crowd didn’t get to hear them as I had previously. A kid in front of me mentioned that “all the songs sounded the same.” If you’re reading this: I can assure you they don’t.

After some time, Snail Mail sauntered on stage to a roar from the audience. They started their set with a noisy shoegazy introduction. They switched gears as lead singer/guitarist Lindsey Jordan launched into “Heat Wave” from their 2018 full-length album Lush. As Jordan plucked the notes on her guitar and began singing of being “so tired of moving on [and] spending every weekend so far gone,” I was frozen with my eyes locked to the stage. Whereas the previous bands distorted their sound in some way, Snail Mail contrasted sharply given how crisp they sounded: Jordan’s vocals—piercing and raw, both familiar and refreshing—were emotional and honest, and corresponded with minor chords and delicately hand-picked scales. The rest of the band joined in, providing a jauntier and more fast paced rhythm. The audience picked up the pace, dancing around with smiles plastered over their faces.

Snail Mail played a couple songs from their debut EP Habit from 2016, including “Slug.” In her delivery, Jordan’s voice broke as she asked a slug “what does another useless day bring?” and her voice crescendoed and cracked as she sang. Hardly a flawed performance, these minor imperfections helped to express the emotionality of the song. Hell, I never thought I’d be affected by a hypothetical conversation with a slug. Afterward, they greeted the audience and well as did “some damage control” by switching out a faulty amplifier. I couldn’t tell there was a problem but I definitely appreciated their sense of humor about the situation.

They proceeded to blaze through their set, bathed in red and yellow lights from the stage. Jordan sang pretty much the whole time with her eyes closed, almost screaming at times. I looked around to see the audience completely enraptured, many with their heads leaned back, eyes closed and singing along to every word. The audience sang along with the same anguish and feeling, living every word in that moment. Of course there were other people moshing and other people talking (quite loudly) off to the side, but moments like these remind you of the power of live music and the joy and catharsis it brings.

After playing one of their more popular songs “Pristine,” Jordan’s bandmates left the stage to let her perform the final couple songs alone. It was a nice conclusion that showed the emotional depth of the lyrics as well as Jordan’s talents on guitar. As she played the melancholic “Anytime,”—about her unrequited love and heartbreak—the disco ball started spinning and it felt like she was singing “I want better for you” to us all.

Before finishing, Jordan spoke on the microphone about how she hates encores and would play her last song then and thanked the audience for coming out. She also thanked all the workers at the venue and encouraged everyone to not drink and drive. Then she dove into “Stick,” the indie equivalent of a power ballad. As she sang asking to “stick around,” we hung on her every word until its abrupt end. It left us wanting another encore, one that would never happen.

I was so affected by the emotionality and meaning of Snail Mail’s music, as well as the emotions of the audience. Snail Mail sing about universal feelings— heartbreak, depression, boredom. Rather than be ashamed, Snail Mail is proud to share these feelings with their fans. The expectations we put on ourselves to maintain composure and hide how we feel on a daily basis can be daunting. Snail mail brings out this shared damage and pain and puts them on stage—literally—and creates a space to hold together. This experience was truly unexpected—but unexpected experiences tend to stick with you—and I’m incredibly thankful for that.

Chandler has been a volunteer at KALX since 2014. She occasionally DJs on-air as Hella Bent. In her spare time, she enjoys drawing comics, baking and extolling the virtues of your local library.