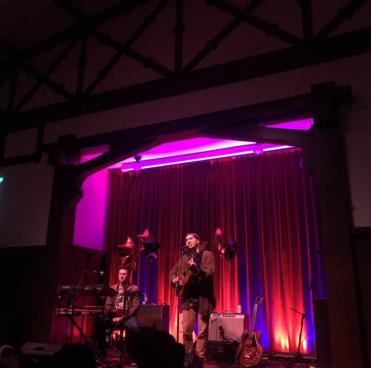 On February 4th 2019, I had the pleasure of attending a show at the Noise Pop affiliated-Swedish American Hall to see the folk rock project Photo Ops open for Merge Records act Tracyanne & Danny. The musical project of Nashville-raised and Los Angeles-based Terry Price, Photo Ops are on tour promoting their most recent song “July” and upcoming third studio album.  I had not heard their music before, so I was interested to hear some melancholy and introspective music. I walked onto the main floor to find a fairly-sized crowd of about 30 people relaxing and chatting amongst the wooden chairs that the venue set out for the show. I settled down, grateful to sit, and enjoy a show of dreamy folk.

Right on time, Photo Ops came onto the stage, which was cutely decorated with pink and red heart balloons for Valentine’s Day. Price was on guitar and lead vocal and featured Preston Garland on keyboard and singing background vocals. They introduced themselves, and began the first of many folk rock songs with heartbreaking lyrics such as “I’d be dead if I didn’t have you.” The crowd was polite and calm, clapping when appropriate, but no “whoops” and cheers like you would find at a rock concert. Yet, the audience was captivated by Price’s solemn lyrics and soulful singing which were reminiscent of Ben Gibbard of Death Cab for Cutie. Garland often played sounds with his keyboard that were not your typical piano sounds; they really added a supplementary layer of softness to his already old-school sound. After about 40 minutes of sweet harmonizing, Photo Ops rounded out their set with their newest track “July.”

Overall, Photo Ops at the Swedish American Hall was a pleasant experience. I had not heard of the band before the show, and their performance was extremely sentimental and every song clearly conveyed a lot of feeling for Price. It is so touching to me when artists are extremely personal within their music, and I loved to see such vulnerability expressed through my favorite medium of art. I would recommend Photo Ops to anyone who likes sadder folk music like Phoebe Bridgers, Conor Oberst, or Julien Baker.