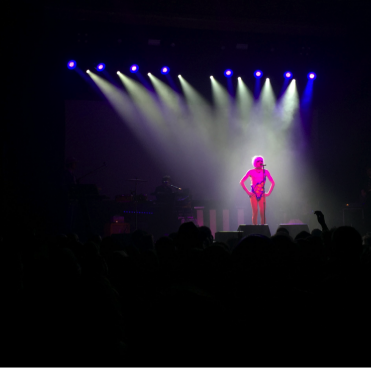 Psych-rock band of Montreal shakes up the UC Theatre with the cosmic interference of their pop melodies and lyrical genius.

After watching numerous of Montreal live performances online, I thought I knew what to expect in concert—and boy was I wrong. My experience seeing the band play at the UC Theatre on May 3rd was sensational and phenomenally entertaining. I found myself in a cosmic dance party, where nothing seems to makes sense, but everything feels right.

The early March 2018 release of White Is Relic/Irrealis Mood revealed a dynamic album of lyrical masterpieces accompanied by vibrant dance music. The drums play a consistent role throughout the album, setting an inescapable downbeat that makes you move. Similar to The Smiths’ pop sounds and sorrow lyrics, of Montreal’s music pairs a dark tone with melodic harmonies. The euphonious melodies that express distaste for systemic sexism and gender inequality turn the music into a formative platform for social change. With added synth and and occasional saxophone, this collection of songs draws from ‘80s club music with its own artistic flair. This is of Montreal’s fifteenth full-length album, and it is just as refreshing and creative as those that came before. It’s pop rock, it’s psychedelic, it has you on your feet. Interviews reveal lyricist Kevin Barnes to be relatively reserved, but his stage presence is nothing short of theatrical and flamboyant.

The drum sticks strike three times. Kevin Barnes struts across the stage with unchoreographed intention dressed in full drag, holding a tambourine and playing it on his mini-skirt-covered thigh. With an electronic surreal ambiance, Barnes bounces around the stage singing “Gronlandic Edit” in a Madonna-esque outfit. Three alien dancers dressed like wise-men waddle about the stage while Barnes sings about how people waste their time praying to gods and nonsensical religions. Somewhere between Prince’s “Kiss” and Rick James’ “Give It To Me Baby,” the music rings of a post-punk intelligence mixed with pop disco synth. Costumes, dancers, and graphics aside, frontman Barnes is a talented multi-instrumentalist and vocalist. His charisma is undeniable, and his voice remarkably clear. More than a few outfit changes later, Barnes wears a slinky red blouse singing “ooo la la” as he straddles the mic stand and flashes the audience with a titillating smirk. You can tell he is not just a musician, but a performer, a dancer, and the life of the party. 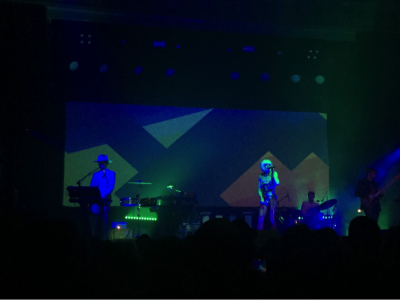 The band was making love to their music, and their music making love to the crowd. Standing still was not an option. Whether a fervent of Montreal fan or a first time listener, this concert was an experience to be remembered. I felt like an audience member of a retro erotic short film at an adult theatre in the Castro District back in the ‘60s. The performance encompassed a circus of extravagant props and a parade of costumed dancers. Confetti spilled through the air as the band’s 2005 pop-rock hit “Wraith Pinned to the Mist and Other Games” shook the venue like an invite-only nightclub. It felt like time was paused and I was programmed to dance.

Suddenly Barnes slowed down the tempo with a ballad, unaccompanied by instrumental arrangements or background noise. Hidden under a cocoon cape, Barnes’ eerie tone and sultry movements captivated the audience. His raw and vulnerable voice tickled the skin of audience members, leaving them with goosebumps and a shiver of fascination. Charming and enigmatic, Kevin Barnes can change his emotional disposition like changing an outfit. From cross-dressing to crossing genres, his musical mystique and persona are infinitely iconic.

Barnes seems to perform for himself—for his own creative expression. Although I hoped to remain in this space-time continuum forever, the night ended with an unforgettable encore. With a bottle of wine in one hand, Barnes blew kisses to the audience with the other. The band closed with “Let’s Relate” from their 2016 album Innocence Reaches, sending the message of inclusion and self love. And in a world where our sexual identities are politicized, Barnes’ honest lyrics and transcendent performance speak to the audience on an intimate level.

In her free time, Elle Henriksen worries about all the good music she’s never heard and frequently finds herself in new dimensions of Spotify because there really is no end to the related artists tab.