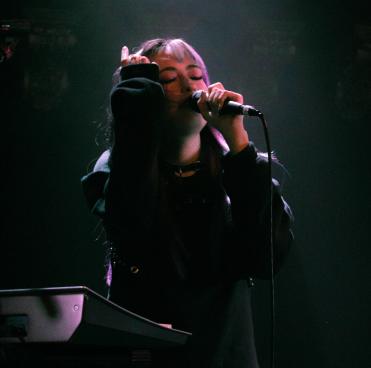 Despite having all their belongings stolen out of their van last year after their show in San Francisco, British J-pop/twee band Kero Kero Bonito made their Bay Area return on Easter Sunday, April 21 to play a show at the Great American Music Hall after performing at two weekends of Coachella.

Their previous local appearance—at the Fillmore, touring in support of their 2018 album Time ‘n’ Place and co-headlining with bedroom indie pop darlings Frankie Cosmos—was absolutely exhilarating. That show was packed and the crowd was buzzing for Kero Kero Bonito and as soon as singer/multi-instrumentalist Sarah Midori Perry (known onstage as Sarah Bonito) took to the stage and held up her fluffy pink stuffed flamingo, the crowd erupted into chaos. I had no idea their Bay Area fanbase was this large and excited so I was excited to see how the crowd was going to react to their sold out, headlining stop this time around at the Great American Music Hall.

For this Easter show, I arrived just before it was Kero Kero Bonito’s turn to take the stage, the crowd humming with anticipation. The floor was absolutely packed, and many people were peering over the balconies as well, anxiously waiting for the show to start. As soon as the clock hit 9pm, the crowd erupted into chants of “KKB! KKB! KKB!” before finally Sarah Bonito (lead vocals, keyboards), Gus Lobban (backing vocals, keyboards, drums), Jamie Bulled (bass guitar), Jennifer Walton (drums, sampler) and James Rowland (guitar) entered the stage. Sarah lifted her cute flamingo toy into the air and the band went right into their biggest song (which also happens to be viral meme) “Flamingo.” The crowd was moshing and passionately singing and dancing and the room got significantly warmer almost immediately. The band was high energy as the crowd as Sarah bounded around onstage holding not only her stuffed pink flamingo, but also a cute, green alligator and a pink toy phone she used to “call” her bandmates with in between songs and during interludes.

Before jumping into the next song, Sarah took the time to kneel down and pray to the God of Rock with a quote from the movie School of Rock, “God of Rock, thank you for this chance to kick ass. We are your humble servants. Please give us the power to blow people’s minds with our high voltage rock. In your name we pray, Amen.” As I moved through the crowd and the rampant mosh pit, I ran into many friends and familiar faces from the previous Kero Kero Bonito show and it was so exciting to see that not only is the band selling out shows, but they are also putting on such a great performance that I and many other fans want to experience again. Kero Kero Bonito played songs from both of their studio albums, Time ‘n’ Place and 2016’s Bonito Generation (the album that got me into the band in the first place at the end of high school), as well as songs from their first mixtape Intro Bonito (2014) and newer singles such as “Swimming” and “The Open Road” (which they wrote about their last visit to San Francisco).

Overall, seeing Kero Kero Bonito at the Great American Music Hall was absolutely the time of my life. It was sweaty, I danced my heart out, and as Sarah put it, “really rocked the f*ck out!” I highly recommend going to a Kero Kero Bonito show, if you can. RIYL Rina Sawayama, SOPHIE, Grimes or CHVRCHES.