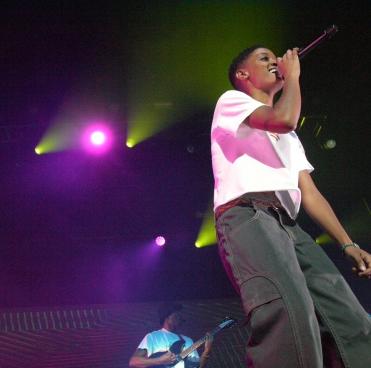 Everyone’s Family at The Internet

Unlike traditional concert stage setups—which often include brightly-lit background screens, LED light shows, and elaborately-dressed backup dancers—The Internet’s performance in Oakland on October 22nd was as cozy and casual as being invited into their living room (literally).

A mid-century couch and wide coffee table adorned with plants sat center stage as the band presently known as The Internet—a soulful R&B rocker quintet consisting of Syd (vocals), Matt Martians (keyboards), Steve Lacy (guitar), Patrick Page II (bass), and Christopher Smith (drums)—performed to a sold-out crowd at the Fox Theater. The venue was filled to maximum capacity in support of the band’s promo of their latest record, Hive Mind, which came out in July. And despite taking their name from the vast, mediated, and digital space we know as the world wide web, The Internet evokes a musical experience that detracts from the digital and focuses instead on proximity and intimacy with their audiences.

Formed in early 2011 by Syd and Matt Martians (both former members of the Odd Future collective), The Internet are as much defined by as they are a product of their namesake. Their journey from being an Odd Future side project to being nominated for a Grammy Award four years later was largely due to the cult-like, internet-based fandom that Odd Future and its related acts effortlessly harnessed at the height of their success.

While their sound has evolved over the past seven years, The Internet’s down-to-earth nature and humble beginnings come across in their stage presence and in their audience interactions. Opening the show with “Come Together,” the first song off of Hive Mind, The Internet had the audience bouncing on its feet and singing along right off the bat. They then smoothly shifted into “Roll (Burbank Funk)”—the second song off of the LP, and another dance-worthy banger.

Next, The Internet took onlookers back to their second studio release, Feel Good, with “Dontcha”, the second single off of the 2013 full-length. Since The Internet’s tour was marketed as the “Hive Mind Tour,” I was pleasantly surprised that the band decided to play something from deep within their musical archive. The rest of the audience seemed to agree with me—concertgoers on the standing-room-only floor swayed back and forth to the bass-driven beat and Syd’s melodic vocals. 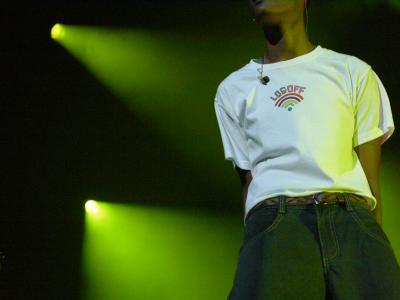 “Dontcha” led into a short but sweet segue into a couple of songs from Ego Death, the 2015 release that arguably brought The Internet to its current level of fame and popularity. The band played “Under Control” followed by “Gabby,” both of which embraced the mellowed-out, soulful sound they’re now known for. Syd’s hypnotic vocals harmonized nicely with the band’s multi-layered instrumentals as the entirety of the Fox Theatre grooved along with them.

The Internet also engaged in friendly banter with the audience and among themselves after nearly every song. Lead singer Syd took pauses in between songs to speak out directly to audience members, thanking them for their support of the band over the years, and even individually pointing out people dressed in homemade Internet merch. At one point, an audience member threw a stuffed teddy bear onto the stage with a letter for the band attached to it, which Syd graciously took and placed on the coffee table conveniently located at center stage.

The Internet took us through a handful of new songs, but the highlight came mid-set with their latest single “La Di Da,” an ultra-catchy, funky track dominated by guitar licks, adlibs, and cameos from different band members. Guitar player Lacy, who is also known as a solo singer and performer outside of The Internet, led the chorus as the audience sang the words back to him. Most notable was keyboardist Matt Martian’s ad-libbed introduction to the song’s bridge, which everyone knew the words to and happily sang along with: “Ladies, ladies, ladies, ladies / Please, there's enough of me to go around / I don't bite / Oh me? You already know what it is /To be honest, all I really wanna do is take you to the ... bridge!”

The performance rolled along for over an hour and a half, with The Internet finally closing their first set with their Kaytranada-produced, neo-soul single “Girl.” The audience sang the song back to Syd word for word, who closed out the performance with gratitude and admiration for the enthusiastic audience. A few moments after first leaving the stage and then being beckoned back with the audience’s chants for “One more song!”, The Internet returned to close out the night with “Curse” and “Get Away,” both tracks from Ego Death.

Even with their successes and consistently well-received releases, The Internet are still considered to be a group that’s quite young in their musical journey. Despite this, they’ve managed to garner quite a following—one that is as excited about the music the band releases as it is about the personas, side projects, and Instagram profiles of its members. In an age where the digital rules everything, it feels comforting to know that a band like The Internet is taking people back to sounds and grooves reminiscent of a time where mastering the dance floor was more important than capturing the moment through the lens of an iPhone.

Avi aka Red Pepper has been volunteering at KALX since 2017. When she's not skimming through records at the station, she can be found ordering something complicated at one of the East Bay's many tiki bars.