Show Review: The Human League @ The Regency Ballroom on 5/13 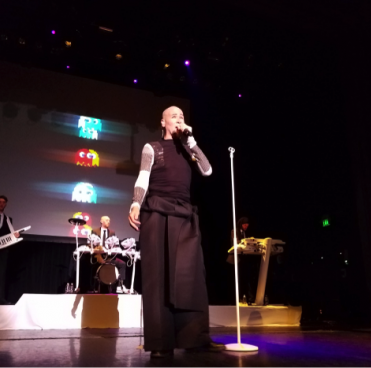 After forty years together, The Human League is still in a a league of their own.

While most celebrated Mother’s Day on Sunday, May 13th, the Regency Ballroom celebrated this holiday with Human League headlining on stage alongside another 80s duo, Book of Love. Vocalist Susan Ottaviano and keyboardist Ted Ottaviano (no relation to each other) warmed up the audience with their dance club synths, husky vocals, groovy keyboard, also a rockin cowbell and tambourine in between songs. Although originally a four-piece, Book of Love have been happily performing as a duo since 2013. Susan admitted that San Francisco is really her “favorite city.” She always smiled for each song she sang (Alice Everyday, Pretty Boys and Girls) and Ted always jiving with the music. They ended their set with “I Touch Roses” as she passed out roses to the crowd.

Then came the moment long lines of fans had been waiting for--- Human League’s grand entrance. We saw their pre-production stage with futuristic white instruments (keyboards transformed into keytars and a electronic drum kit). We knew they were planning something huge.

At last, a younger backing crew, including onstage engineer David Beevers, electronic percussionist Rob Barton, and multi-instrumentalist Josh Cana walked on stage behind their instruments, and then supporting singers Susan Ann Sulley and Joanne Catherall joined them. Frontman Philip Oakey busted out singing “Sky” looking like Neo from The Matrix with his long black trench leather jacket and tiny black sunglasses. Everybody was wearing black attire which contrasted sharply with their white instruments. Oakey then went straight to the next songs “Mirror Man” and “Heart Like A Wheel.” 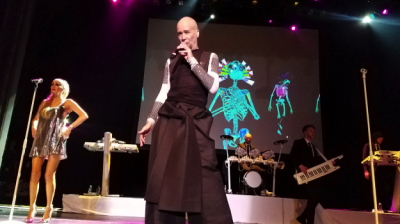 The Human League revisited some of their former albums, including Dare, Hysteria, Crash, Romantic?, Octopus, and Credo during their hour and a half performance.  While Oakey has been in Human League since 1977, his voice didn’t seem to show his age, sounding very similar to the band’s recordings.

The trio went on to sing “Soundtrack To A Generation,” exposing their 80s roots as they were performing. , Meanwhile, the screen behind them projected images of the popular 80s video game, Pac-Man. When they sang “The Lebanon”, the crowd was cheering and dancing; one fan behind me was screaming at the top of her lungs. Mid-set, Human League slowed it down from their disco punk synths to a more vulnerable song titled “Human,” where Oakey truly sang from the heart. They picked up the tempo with fan favorites “Love Action” and “(Keep Feeling) Fascination” where audiences began clapping and Human League continued their fun on stage. The girls sang in unison complementing Oakey’s distinctive contrasting vocals.

As they left the stage before their encore for another wardrobe change, Oakey returned to the stage dressed all in white while Susan and Joanne were dressed like flapper girls. They returned to the stage to sing  “Don’t You Want Me,” their biggest hit, and the crowd reminded them of that as they sang along wanting more. Human League concluded with the song “Together In Electric Dreams” as Oakey sings, “We’ll always be together” while the guitarist shreds into a solo. Human League’s music definitely brought guests together to remember that night.

“It was an excellent show. Phil Oakey’s voice is really strong. He sounds exactly like he did in the 80s,” said Len Haynes, a concert attendee.“The mix was really good. The keyboard synths sounded similar to the albums. They made a really good effort to make it sound like the records. It sounded very analog and I like that.”