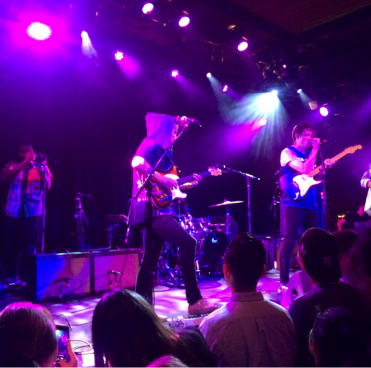 Hippo Campus proved their unquestionable musical talent through their vigorous performance at The Independent, begging the eager question of how their music will develop and grow in the years to come.

Even in the summer, San Francisco is a city of windy retreat from the sun. Nonetheless, there is a warm youthfulness which pulses through its streets, clicking and zapping over centers of musical vitality. Minnesotan band Hippo Campus threw their embers into the fire of this scene on Monday, June 9th, when they played their first San Francisco show at The Independent—for little incarnates the sunbaked adolescence of summer more than their upbeat indie rock music.

Hippo Campus was formed in 2013 at the Saint Paul Conservatory for Performing Artists, the high school at which its four members met. Since then, they have been rising in recognition while releasing three EPs—Bashful Creatures, South, and warm glow—and a debut album—Landmark. Their sound has a bubbly, balmy vibe, characterized by buoyant, overlayed guitar lines, dynamic falsettos, and the occasional jazzy sax. 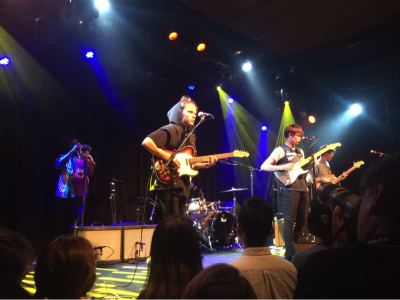 The milieu of Monday night served as a testament to the quartet’s rising popularity, as the well-recognized venue was filled with exuberant voices entirely familiar with the words and rhythms of their discography. The band played to the crowd by opening with three of their most well-known creations—“baseball”, “Way It Goes”, and “Little Grace”—all of which featured and highlighted an additional saxophone player, who remained dancing on stage for the rest of the concert.

As the night went on, the band pulled into some of their lesser-played ballads such as “Vacation” , stretching and improvising rather than playing them verbatim. Main vocalist (and KJ Apa-lookalike) Jake Luppen frequently took the spotlight to showcase the range of his sonorous voice, gliding from note to note like honey. Complemented by the backup vocals of guitarist Nathan Stocker, bassist Zach Sutton, and drummer Whitten Allen, their harmonies built a lively sense of youthful camaraderie, an energy which disseminated itself through hundreds of grooving bodies.

The climax came during the emotionally powerful “South”, at which point the crowd’s energy rose up to meet the stage through passionate singing. After a few more tracks, the band initially closed with their most popular song—the poppy “Buttercup”—before returning to the stage for a crowd-demanded encore with the heavier, soulful “Violet”.

For four nineteen-year-olds who weren’t even allowed in the venue’s green room, Hippo Campus proved their unquestionable musical talent through their vigorous performance at The Independent, begging the eager question of how their music will develop and grow in the years to come. Their sprightly, swinging sound carries in it all the swells of summer, bringing the carefree vivacity of road trip revelries to urban streets.