Show Review: Hatchie @ The Independent on 4/9 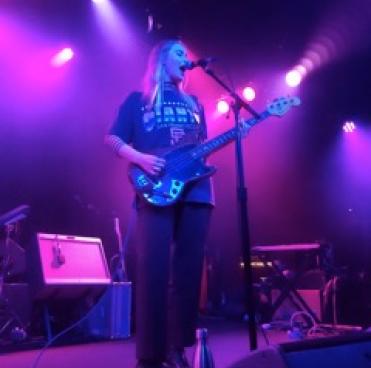 The night of April 9th, 2019 was no ordinary Tuesday: The Independent in San Francisco had an empowering night of radically honest indie acts Kitten, Girlpool, and opening highlight Hatchie.

When I heard that Hatchie was back in San Francisco for her tour, I knew I had to go! I was thrilled to see the musical project of Australian singer Harriette Pilbeam return to San Francisco since I missed out on her show last year at Cafe Du Nord. It was a pleasure watching Hatchie perform as a trio and hearing her music live for the first time at The Independent. Hatchie first came to San Francisco to perform her EP Sugar & Spice and now the talented solo artist has an upcoming album Keepsake, out June 21st. Her first record as a solo artist since playing with Babaganouj and Go Violets, I was exhilarated to see what she had in store.

Before Hatchie graced audiences with her presence, we were highly entertained with opening L.A punk wave band Kitten. I had never heard of the band before so I was in for a surprise when Kitten came with full energy in their explosive set: “I Did It!”, “Strange Embrace” (dedicated to Hatchie), “Fall On Me”, “Abigail”, and “Pink Champagne.” Frontwoman and founder Chloe Chaidez made sure no one in the crowd was bored as she free-styled and flash danced on stage. From doing a handstand falling into a gymnastic bridge, standing on a fan’s shoulder, and jumping off stage barefoot, Kitten stole the show! They definitely amped up the audience to see Hatchie, but unlike Kitten, Hatchie’s music is more serene, reminiscent of nostalgic ‘90s shoegaze love songs.

After a short recess, fog smoke slowly filled the stage, setting the mood. Hatchie took over the stage to sing her song “Sugar & Spice” wearing a SF Giants t-shirt and the crowd cheered seeing their city represented. Hatchie’s voice is full of sweetness and innocence as she sings, which drew me to her music in the first place. I’m sure The Cranberries, Cocteau Twins, and Sixpence None The Richer would agree that Hatchie is revitalizing dream pop for the next generation. Hatchie’s next song “Her Own Heart” is off her new debut album. Once that song ended, she went back to her older and well-received song “Try.” It’s definitely a fan favorite even for the band Kitten as they were dancing and singing along to Hatchie’s song off stage. It’s fun always seeing other musicians supporting one another and how sharing a love for music brings us all closer together.

Hatchie’s drummer not only played drums, but also chimes as they play a role in a majority of her tracks. Hatchie’s music is ethereal in its ability to transport listeners to what the early ‘90s sounded like when romantic music ruled the airwaves. As a ‘90s baby herself, Hatchie captures the essence of ‘90s celestial jangle pop in her ten track album Keepsake with spacey reverb and synths. Hatchie went on to play two more new songs off Keepsake: “Without A Blush” and “Kiss The Stars.” In “Without A Blush,” Pilbeam deftly plays a funky bass rhythm, showing her tremendous talent when it comes to writing, singing, and playing her own music. “Kiss The Stars” reminded me of The Cure’s “Pictures of You”: it was a blend of smooth moodiness and affection. Guitarist Joe Agius had to switch to a different guitar for this song because of technical difficulties, but Hatchie still kept singing angelically and Joe joined in singing. In addition to his sonic talents, Joe is also brilliant mastermind who has directed all of Hatchie’s music videos. He has an excellent eye for art direction! Hatchie’s final song “Sure” was the perfect song to end her set, as everybody swayed to the music.

I did wish that her set was longer or that she would’ve headlined; that way I could’ve heard her sing “Sleep,” “Adored,” and “Stay With Me.” Without a doubt, I’m sure Hatchie will come back to the Bay Area and I hope to hear her full set of Keepsake next time around.

Jisselle Fernandez aka Stormy Phoenix has been a KALX volunteer since 2015 and is studying broadcasting. When she’s not volunteering, working, or going to school, she loves to attend concerts!