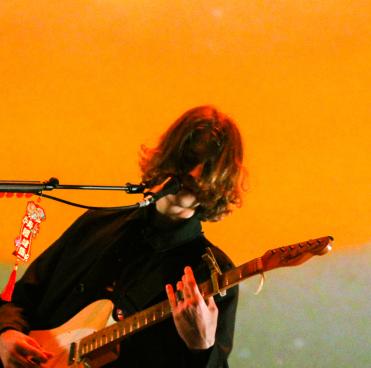 On the most relaxed day of the year, Fleet Foxes took the stage at the Hearst Greek Theatre and lulled the crowd into a dream state with their baroque pop/orchestral magic.

There was something in the air that night—whether from the power of the festivities or the band’s sweet string melodies—that left the crowd in high spirits as they vocally expressed their appreciation for singer-songwriter Robin Pecknold, keeping him smiling the entire show.

The night began with indie psychedelic rock group Amen Dunes, swaying the audience into a playful and relaxed state of mind with their upbeat, rhythmic bops. However, as the opener finished up, the tension in the crowd was at an all time high as many awaited to see their idols take the stage for the first time since 2011. I felt myself filled with nostalgia as I waited to hear the tunes that once played on my dinosaur ipod nano which had lulled my moody adolescent self to sleep during long road trips to the desert. At that time, the group had just released their self titled debut album with some of my personal favorite tunes,“White Winter Hymnal” “Blue Ridge Mountains” and “Tiger Mountain Peasant Song.” Three years later, in 2011, the band released their dark, highly successful album Helplessness Blues—their only album to feature sexy entertainer Josh Tillman. But, after six years of silence, Fleet Foxes’ Crack-Up was released June 16 of last year, featuring beauties such as “Third of May/Ōdaigahara,” “Fool's Errand,” and “If You Need to, Keep Time on Me,” all of which feature themes evocative of the F. Scott Fitzgerald essay that serves as the album’s inspiration.

The time was around 9pm. The backdrop was a vibrant rainbow gradient. All that was on the stage was a hand of a small mannequin as Fleet Foxes took the stage after six years—but this time accompanied by New York brass quartet The Westerlies. Throughout the night I found myself fixated on the four men playing off to the side as their powerful, brass sounds echoed through the entire venue. The Westerlies added an unforgettable fullness to familiar Fleet Foxes tunes I heard for the first time years ago; a fullness that could only be taken in and captured during a live show. As the band started with songs from their most recent album, their visuals of sunset landscapes and passing clouds fittingly had the crowd soaring high as they played “I Am All That I Need/Arroyo Seco/Thumbprint Scar.” The night was charged with collective effervescence as we found ourselves forming a good-natured dance party when the band transitioned into a crowd favorite “White Winter Hymnal” and others from their debut album including “He Doesn’t Know Why,” “Your Protector,” and “Oliver James.” Pecknold then announced his next song was a request by a young man who, days prior to the show, had undergone brain surgery. After being left in a trance from the bands woodland fairytale folk melodies, the night ended with an unforgettable saxophone solo by  Morgan Henderson during the climax of “The Shrine/An Argument” off the album “Helplessness Blues.”

As the show wrapped up, I looked around to see the expressions of those I shared this night with. Many were in light spirits, hugging loved ones and even laughing uncontrollably—from what I could only imagine to be a result of cannabinoid wonder. All that can be said for sure is on Friday, April 20th, after six years, Fleet Foxes took the stage and after a heavily anticipated performance, put on a show that was perfectly euphoric.