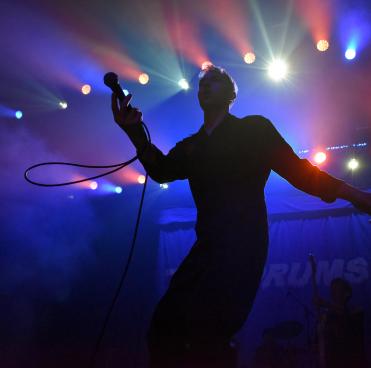 The Drums return to the Bay with a bang!

Last summer, I saw The Drums headline at The Fillmore in San Francisco following the release of their fourth album Abysmal Thoughts. This time around, they opened for Alvvays at the Fox Theater Oakland, my favorite venue, on my favorite day, my birthday! My friend Stephanie invited me to the show to celebrate the long-awaited annual coming of April 12th. This would mark Stephanie’s first live encounter with The Drums; as a veteran, I knew the New York indie surf pop band would be a treat for both of us.

The Drums consists of singer Jonathan “Johnny” Pierce, bassist Johnny Aries, guitarist Tom Haslow, and drummer Danny Lee Allen. The Drums came together in 2008, but didn’t release their self-titled debut until 2010, when their hit songs “Best Friend”, “Me and the Moon”, and “Let’s Go Surfing” were unleashed to the masses. One decade and three albums later, these gems are joined by the hits that launched The Drums into the limelight, namely “Money” and “Blood Under My Belt”. Stephanie and I were eager to hear each and every one. During their 50 minute set, they saw to it that our hopes were fulfilled, playing every lauded track from their albums Portamento, Encyclopedia, and their latest record, Abysmal Thoughts. Pierce emerged from the blackness wearing stylish coveralls that had his name, “Johnny”, embroidered on the right corner and “ABYSMAL THOUGHTS” on the back. Pierce’s style notoriously treads the line between fresh and classic, though I had barely begun to appreciate his fashion savvy before he belted out the first lines of “Best Friend”, to which Stephanie and I responded by grabbing each other and screaming along with him:

Hearing that song with your best friend solidly in your grip is a thrilling, warming feeling. “Best Friend”, like most of Pierce’s pieces, is an upbeat anthem with a somber tale to tell. But having Stephanie there dancing with me let me take the message of friendship to heart, and only made me as happy as the beat was bouncing. After a breath, Jonny proclaimed: “We’re back Oakland!” The audience went wild, and then even wilder as they kicked off “Let’s Go Surfing”. Almost immediately, attendees started doing some surfing themselves...crowd surfing! Stephanie even considered clambering up there, but I told her she would lose her spot in the front if she abandoned it. When we eventually had a small space of silence, she remarked: “The first song that introduced me to The Drums was ‘Let’s Go Surfing’. From then on I always wanted to see them!” As if to respond, Pierce offered: “We’re just getting warmed up,” then transitioned to “Money” where everybody bum-rushed the front and shouted the lyrics:

Then Pierce slowed the tempo down with his songs “Heart Basel” off of Abysmal Thoughts and “Days” from Portamento. During this mellow spell, blue and red spotlights swam across the stage. I felt the blue melt the mood into calm pensivity while the red carried through that beach fun vibe The Drums are so known for. The Drums could be a modern-day Beach Boys with their 60s summer jangle pop sound, however, lyrically they draw inspiration from Joy Division/New Order. Johnny writes about his personal experiences with relationships. For example, “Blood Under My Belt”-- which includes a coy feature of his ex-boyfriend Keon Smith-- is about his ex-husband Jasper Rischen and the pain that came with divorce. While their music may sound sunny, there are plenty of shadowy nuances to be found, like in the song “How It Ended” that explores the regret of disappointing a significant other.

On stage, however, all this emotion gives over to ecstasy. Pierce’s presence feels elastic and carefree as he lets his body loose like a wave rolling through his happy place. It’s fitting with the summery soundscape The Drums broadcast so well. I had a groovy time dancing alongside my friend and watching Aries and Haslow shred their strings side by side. After the brief interlude, our boys sprinted to the conclusion of their set through “Book of Revelation,” “What You Were”, and the finale “Rich Kids”.

What a way to kick off a show! Stephanie and I were eager to see if Alvvays could follow, and of course we were not disappointed. As we were leaving the music hall, Stephanie noticed a sign that promised a wristband to meet The Drums with the purchase of a shirt, hoodie, or LP. Though the two of us were tempted, fatigue beat out our fangirl impulses, and we missed out on the opportunity. However, we did run into another fan who took advantage of the meet and greet. She shared that Johnny is as sweet as he looks and held her hand to thank her for the support she’s given to The Drums. I hope to see The Drums again in the near future. Next time, I’ll snag a meet and greet wristband so I can jokingly serenade Johnny with his song “Forever and Ever, Amen”, as a thank-you for the thrilling performance he gave us.