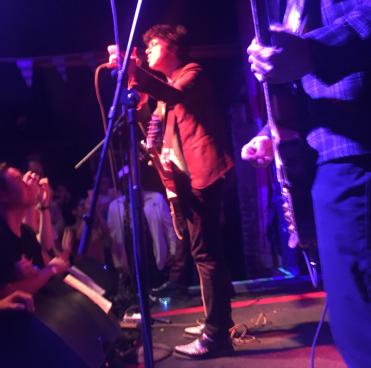 Famed musician Billie Joe Armstrong decided to ditch the arena stage for a night, jumping down and performing on the small stage of local Oakland bar The Golden Bull with The Cover-Ups.

Written and Photographed by Jessely Serrano

Many of you may know Bay Area punk Billie Joe Armstrong from Green Day, but did you know about his side bands? More specifically the Cover-Ups, which is made up of three Green Day members: Billie Joe (guitar and vocals), Mike Dirnt (bass), and Jason White (rhythm guitar and vocals), as well as Green Day’s tour manager Bill Schneider (second guitar) and their sound engineer Chris Dugan (drums). As the name suggests, they cover songs from primarily rock and punk bands, such as the Ramones and Cheap Trick.

This past Sunday, September 29, 2019, the Cover-Ups played at The Golden Bull bar on 14th St Oakland as an Oktoberfest celebration with local Berkeley band, Sarchasm, opening at 8:30 on the dot. This indie punk band came out loud and fast with Mari on guitar and vocals, Alex rocking the bass, and Stevie bashing on the drums. They’re angry, they’re goofy, and they’re a mix of political rage and Saturday morning cartoons. Sarchasm played songs from their new album Beach Blanket Bummer Pop, which came out earlier this year in April 2019. The entire bar was bouncing with Sarchasm’s energy and frustration, with songs like “Mind over Matter” that screamed of millennial hopelessness about the “F**ked up world we live in,” this dystopic world of Trump, melting icebergs, and massive species extinction, filled with “racist fingers pointing all around.”
Sarchasm did not disappoint. As they were nearing the end of their set, Mari thanked the Cover-Ups for letting them open up. However, at the time, none of the Cover-Ups had shown up and even Sarchasm was wondering where they were. Although the night was still young, some began to worry the Cover-Ups would have to cut their set short if they started later than anticipated.

Thankfully, as it got closer to 9:30 p.m., one by one the Cover-Ups began to appear.  Unfortunately, Mike Dirnt was unable to attend, so Greg Schneider, editor of the Turn it Around documentary, filled in for him. Quickly, the already crowded bar somehow seemed to get even more crowded as fans surrounded all three sides of the stage. The Cover-Ups’ official setlist was as follows:

The night consisted of strong vocals coming from Jason White. In Green Day concerts, Jason specializes in backup vocals and rhythm guitar, but tonight he was the main star. Jason’s voice is raspy yet melodic, a mix of Axl Rose and Alice Cooper. Billie, of course, took over the much more melodic songs of the night, but he would generally pass off most of the vocals to Jason while he worked on hyping up the crowd and jamming on the guitar.

“Hey! Can you turn up the enthusiasm in my monitor?” shouted Billie Joe at the sound engineer. With that said, the crowd quickly began to cheer louder, and Jason began to groove to “Born to Lose” on a tambourine and showed off some dance moves. Billie then asked the crowd if anyone actually knew German and, in the entire bar, only one person was fluent and said a German phrase into Billie’s mic which Billie repeated. Since the band was celebrating Oktoberfest, Chris Dugan wore Lederhosen and the band drank three pitchers of beer (which they quickly finished), resulting in two potty breaks for Billie Joe. Regardless of this, the band provided nonstop covers from David Bowie to the Rolling Stones, which the crowd all sang along to.

While playing Cheap Trick’s “Surrender,” the crowd got a hold of maracas and proceeded to passed them around so that everyone could get a turn. As the band neared the end of their setlist, the crowd remained just as energized as when they started, no one wanting the night to end. Thankfully, the band felt the same way. Before playing their final song, Brinsley Schwarz’s “Peace, Love and Understanding,” the band jumped into “Walking Out on Love” (Paul Collins Beat cover) then “Ziggy Stardust” (David Bowie cover), and continued to play classic rock songs one after another. Quickly, what was originally supposed to be an hour and a half show became almost three straight hours of punk rock featuring the following songs:

“Who has work tomorrow?” shouted Billie into the crowd as he jumped into the next song of the night.  Most people did, including me, but no one was complaining because how many times do you get to hear all these classic rock songs played by one of the Rock’n Rock Hall of Fame artists?

It may have been the booze or the energy, but nearing the end of the night, Billie Joe said the Cover-Ups may do a mini-tour and play in the Ivy Room and Stork Club and a few other places. Here’s to hoping for more amazing shows!