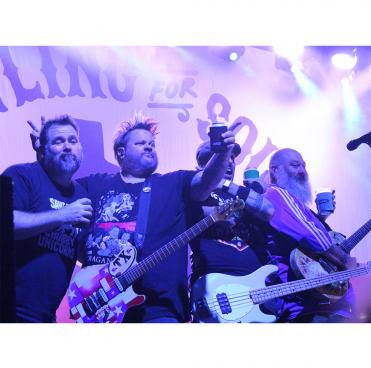 Self-described as “Older, fatter, but still the greatest ever,” Bowling for Soup surged back from the 90s to hit hit Berkeley’s UC Theater.

Written By: Jessely Serrano A.K.A Reverend Twitch on the air

Perhaps you thought this squadron of 90s and early-00’s pop-punk had faded into the past? Guess again––they’re on tour and celebrating twenty-five years of bandhood. Yes, in  case you missed it, Bowling for Soup rolled into the  UC Theater July 25, sharing their bill with other bands of their era: the So-Cal ska punk-sensation Reel Big Fish and Mest, a pop-punk quartet out of Chicago.

At 7 p.m., doors opened and fans, young and old, began to trickle in. The younger cohort rushed to the stage while many punk rock veterans stayed further back, likely protecting aging knees and elbows from the night’s inevitable mosh pits. Many congregated in the upper floors, where plumes of vape could be seen curling up from the pit as it grew ever more tightly packed tightly with punksters eagerly awaiting the start of the show.

An hour later, the night finally began. Mest ran onto the stage and launched into one song after another, offering little banter in between. Mest, (Tony Lovato (vocals, guitar), Jeremiah Rangel (guitar), Matt Lovato (bass), and Nick Gigler (drums)) played hits such as “Long Days Long Nights” from their 2000 album Wasting Time and “Fuct Up Kid” from Destination Unknown. Their last album, Photographs came out fourteen years ago, in 2005. In fact, the band broke up in 2008. But now, the original lineup is back together for their new album, Masquerade, coming out this fall.“I coulda guessed the day would come, that you would consider me scum,” howled Lovato as his bandmates crisscrossed the stage behind him.

Warmed by Mest, the fans were ready for Reel Big Fish who took the stage with horns blasting (specifically those of John Christianson on trumpet and Matt Appleton on saxophone). Reel Big Fish brought the beachy vibes of their native Orange County in fashion and in sound, with Aaron Barrett (vocals and guitar) in a green Hawaiian shirt and straw fedora, Ed Smokey Beach (drums) in a tank top and Derek Gibbs (bass) in a peach-toned plaid straight out of my middle-school math teacher’s closet.

They kept the energy up, playing their smash hits “Sell Out” and “I Know You Too Well to Like You Anymore,”  and sending a man dressed as Santa Claus into the mosh pit. Barrett impressed the crowd by playing guitar behind his head: “Making that cord was called drunk minor…beeeer!”  he shouted.

Bowling for Soup, the band everyone had been waiting for, came on at 11:00. “[We are honored] to share a show with our heroes [Reel Big Fish]” Reddick said, beaming.

Wondering how the BFS set list shaped up? Here it is, faithfully transcribed:

After ending their set with their hit “Girl All the Bad Guys Want,” Bowling for Soup stood back by the drum set and looked out at the cheering crowd. After the most cursory of beats, Reddik stepped forward with a grin. “We’re back!” he shouted. “See, a lotta bands finish their show and go stand over there,” he said pointing backstage. “We take the guesswork outta encores.” With that, they launched into their biggest hit, “1985,” joined onstage by the brass section from Reel Big Fish.

For veteran fans that hadn't seen these bands since the 90’s, perhaps this was a reminder of that more youthful and energetic time. For fans too young to remember the 90’s, or not even born in the 90’s, this was surely a blast into the past of a different generation’s music.

The night ended with punks young and old staggering into the cool Berkeley night, a 90’s beat still throbbing in their hearts.