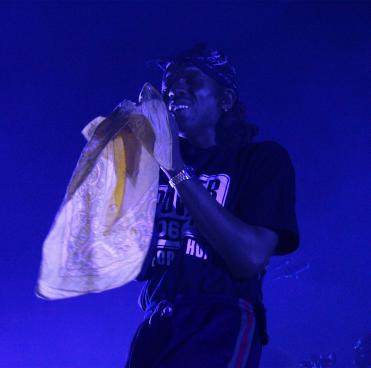 Blood Orange transcends cultural boundaries at Oakland’s beloved Fox Theatre. Not just a concert, but a musical performance of love and beauty.

On September 20th, Devonté Hynes, better known as Blood Orange, brought the groove to the Fox Theatre, uniting cultures and communities with a common love for music. Crowd members were shaking with anticipation, as the voice of Janet Mock on the song “Family” echoed throughout the venue, speaking words of love and inclusion, and setting the tone for the show: “You asked me what family is/ And I think of family as community /I think of the spaces where you don't have to shrink yourself /Where you don't have to pretend or to perform...”

This introduction to the concert was powerful and bold, as the audience quieted down to listen to the soft words of Janet Mock. Red colored lights beamed onto the stage like furious rays of sunshine, only allowing the audience to see a mere silhouette of the band. The surreal ambiance of the venue immediately shattered when Devonte Hynes glided across his makeshift dance floor, as a groovy beat shook the ground like a musically solicited earthquake. Sensuality and raw talent coursed through Hynes’ voice– he cannot help but breathe beauty and art, as he exhaled a monotone rap with no breathing room for mistakes.

The release of Negro Swan on August 24th marked Blood Orange’s fourth studio album of which the sixteen songs collectively express the duality of discrimination and celebration of race. The audience danced along with Hynes as his contagious groove spread throughout the venue. 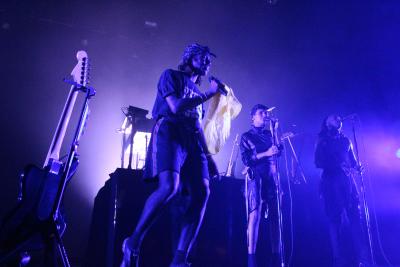 Something that seemed to disrupt the flow of the concert was the pitch-black darkness that would swallow the stage after the end of each song. Assuming the band was taking a breath to prepare for the next track is understandable, but the crowd’s excitement briefly subsided as they waited patiently for the bassline to pick back up.

Pop funk hits “You’re Not Good Enough” and “It Is What It Is” played one after the other, each song resonating with the audience. “Best To You” filled the venue with soul, while “Desireé” made every listener hum in harmony with the band. Hynes hopped on the piano as if riding a bike, his second nature talent kicking in as “Champagne Coast” kicks off. The audience clapped in unison, and Palo Alto vibes radiated through the air as the band played some of the 2013 film’s soundtrack. A flute and saxophone made generous appearances, often leading to a jam session, with the audience’s cheers acting like another instrument adding to the composition.

What was ridiculously inspiring was how many people were dancing and singing rather than recording the show with their smartphones. The audience was in the moment, not letting a single second slip by without indulging their inner sense of groove. Devonté Hynes let the crowd in on a secret as he whispered into the mic, “[I’m] very happy to be here.” A Jimi Hendrix meets Terence Trent D’Arby experience, Blood Orange invited us along on an opera rock concert. Seeing Hynes perform live is, without a doubt, a religious experience.