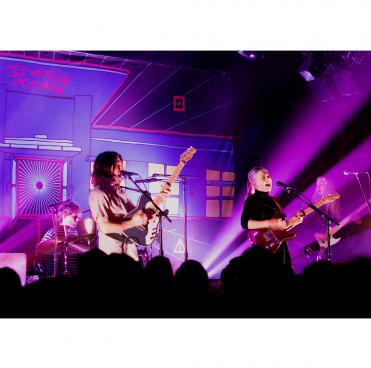 Better Oblivion Community Center is as much a performance art piece as a band. Made up of musicians Phoebe Bridgers and Conor Oberst, they made a splash preceding their eponymous debut from January of this year by distributing cryptic brochures and advertisements announcing their 2019 slate of events (read: concerts), including a phone number that links to an answering machine for the alleged community center, listing services such as a “dry ice meditation service.” An intimate crowd experienced the most recent “dry ice meditation service” at the Independent in San Francisco on Sunday, August 11th, following the band’s Outside Lands debut across town.

Alabama based singer-songwriter Taylor Hollingsworth took the stage first, lending his folk authenticity to the evening. Hollingsworth is no stranger to Oberst: he has been a member of Oberst’s backing band The Mystic Valley Band for the past 12 years. With just four songs in his set, Hollingsworth captivated the audience with his twangy, imaginative sound, best exemplified by his song “Bonnie and Clyde.” But he made sure to keep the focus on the headliners: “they’ve certainly made my oblivion better,” Hollingsworth quipped.

Edison bulbs scattered around stage, creating a garishly colored cartoon backdrop of a community hall, which heightened the otherworldly feeling.  “Welcome to your local Better Oblivion Community Center meeting,” a distorted voice intoned to the sold-out crowd. A hushed reverence fell over the on-lookers, devoid from any jostling or rowdiness one might expect from a gathering of this size. The crowd’s collective attention was focused on the dimly lit stage, trying to decipher the words of the tinny answering machine. The voice continued: “confusion is overrated, truth can be fun. We commence with this evening’s proceedings.”

And commence it did. Better Oblivion Community Center kept the crowd in rapt attention for the next hour and a half, the onlookers not wanting to give up on the weekend. Their candid, slightly morose lyrics and minimal, folksy production hardly make for raucous festival-fodder, but Bridgers’ and Oberst’s dueting vocals demand attention.

Like “I Didn't Know What I Was In For”—the opening track from their debut album—is a tale of the cognitive dissonance of everyday life. “My arms are strapped in a straight jacket / So I couldn't save those TV refugees” they intoned, “we get burned for being honest / I've really never done anything, for anyone.” They offered no comfort in their assessment of modern life, nor any recusal for listeners who might identify with these situations. Yet they managed to create a spirited mood: more akin to a community meeting, recounting failures to facilitate connections. A pack of inflatable beach balls were released into the crowd at one point and the band gamely threw them back as they continued to perform.

“I feel like I dance like a Festival Dad—bouncing like a toddler,” Bridgers noted between songs. “That’s exactly how I dance,” and then proceeded to demonstrate a movement with a steady pulse from the knees, all while holding her upper body stiff and a bit awkward. Comically, she kept it up throughout the next song.

They began their encore with a cover of “Shallow,” the popular anthem from the film A Star is Born—almost defiantly performed due to its mainstream status but presented with the same wry, honest approach as their main set. It ended up being one of the highlights of their performance.

“Thanks for coming to our last show ever,” Bridgers  closed, a nod to this as the last announced show. Even though the duo released their debut self titled album only at the beginning of this year, they plan to take an indefinite hiatus to focus on solo projects. They ended their last show ever performing “Easy/Lucky/Free,” a song from Oberst’s best known project, Bright Eyes, leaving the stage with the guitar reverb still echoing.

“Hi! Thank you for visiting the Better Oblivion Community Center,” the ubiquitous answering machine picked up as the guitar faded out. “That’s all. Bye now.”

Whether or not that statement proves to be true, this reporter was thankful for this visit to the local oblivion community center.

Noelle works on campus during the day and escapes to KALX on breaks. Around the station, she can be found helping publicize the station, coordinating ticket giveaways, and occasionally filling the airwaves with dance tracks of all shapes and sizes.