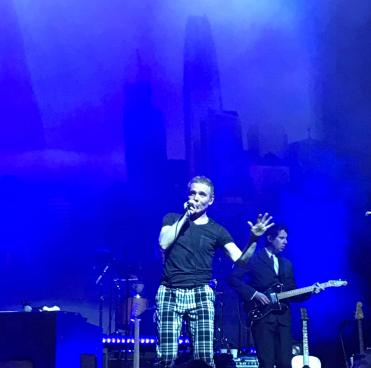 Belle and Sebastian casts their positive charm at the Fox Theater.

It’s safe to say that Scottish baroque-inflected indie pop group Belle and Sebastian care a lot about relationships and making connections with people––cultivating real, genuine experiences with others. It runs deeply as subject matter and character studies across their 100+ song catalog and album artwork, and it shows up in their live shows as well. On the night of June 25 at the Fox Theatre, Belle and Sebastian’s commitment to reaching out to everyone was palpable.

Frontman Stuart Murdoch emanated a wholesome warmth, whether it was from his gentle, cordial vocals or his charming banter. For instance, Murdoch out of nowhere told the crowd, “We’d be awfully lonely without you.” It was in the little details, such as a smile spreading on Murdoch’s face during the tenderly saccharine “If She Wants Me,” or his impromptu yoga session between folksy acoustic “Piazza, New York Chapter” and wistful “A Summer Wasting.” The singer instructed the crowd to take expel all of their problems: “Breathe in, and breathe out all your shit. I’m gonna catch it and put it in my pocket.” 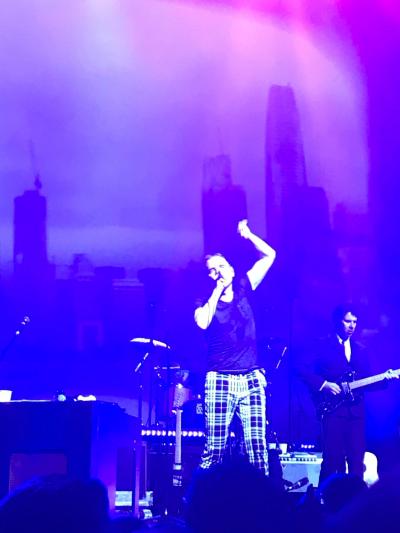 And the wholesomeness was there in the bigger theatrics of the livelier numbers as well. On catchy disco track “Poor Boy,” off of Belle and Sebastian’s new string of EP releases How to Solve Human Problems, the performance was accompanied by a fun compilation of all kinds of dance footage projected behind the band, from Betty Boop shaking her hips to cheesy ‘80s instructional dance videos. At one point, Murdoch mimed the dance moves behind him playfully. During “The Boy With The Arab Strap,” he strutted back and forth on the stage to the jangly, delicate indie pop imbued with melancholy memories, his black and white plaid print pant legs blurring together. As Murdoch sang of fellow Scottish outfit Arab Strap, he treated the now 20-year old Belle and Sebastian number with a few small lyrical modernizations: “racist clientele” was replaced with “racist president,” and “she’s got style” with “she’s got gender fluidity.” Belle and Sebastian kept it fresh by dipping into a pretty even spread of their 20 year plus discography, including songs from Fold Your Hands Child You Walk Like a Peasant and The Life Pursuit.

And throughout the night, band members traded instruments with one another, grabbing maracas, keytars, and flutes. As if that wasn’t enough, a trumpet player or cellist would get on stage for a song. By the time the funk-laced stomp of “The Party Line” began, around a dozen members of the audience, those in the front whom Murdoch had pulled up the song before, spilled on to the stage from the wings and danced with the band.

After the mega dance party ended, which was perhaps the purest moment of the night, Murdoch excitedly talked about taking the ferry to San Francisco for the first time. Then, as the band launched into the upbeat “I Want the World to Stop,” footage of Murdoch’s ferry ride appeared behind the band on the giant screen, saturated with a pale blue, vintage-looking filter. Planned or not, the backdrop of familiar bay waters brought a wash of nostalgia, a kind of childlike peacefulness that glided well with Murdoch’s bright voice, which wished to put life on pause.

There’s something contagious about relishing in excitement with other people. In the case of the Belle and Sebastian show, it was exhaling all of your anxiety and fear for Murdoch to catch, and then grooving to classic B&S tunes injected with a newly political edge. Belle and Sebastian, even on that giant Fox stage, reminded the crowd that the simple act of approaching things with wonder and sharing that joy can solve our human problems.

Adrienne majors in a soft science and has a soft spot for “Pacific Coast Party” by the band Smash Mouth. Catch her sporadically on the KALX airwaves as DJ yan yan. Twitter