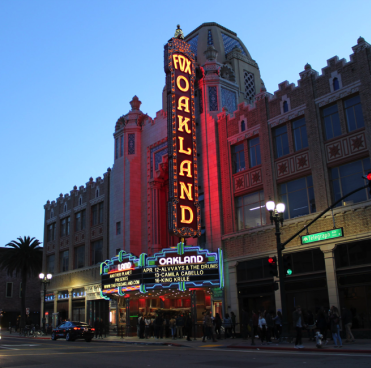 On Thursday, April 12th, everyone inside the Fox Theater Oakland had a chance to “forget about life” for a few hours as they sang and swayed to the melodies of Canadian indie pop band, Alvvays.

As someone who fearfully approaches mosh pits to get as close to the stage as possible, I was truly relieved to find that as I made my way through the crowd, I did not encounter the typical shoving and tripping. Instead, I appreciated seeing the expressions of sincere joy amongst the audience as they nodded and danced without a care in the world.

On Thursday, April 12th, everyone inside the Fox Theater Oakland had a chance to “forget about life” for a few hours as they sang and swayed to the melodies of Canadian indie pop band, Alvvays. As lead singer Molly Rankin took the stage in an all-white outfit, the band greeted the crowd by starting the show off with “Hey,” a track off their most recent record Antisocialites.

After the second song, Rankin charmingly remarked, “Oakland! What a dump. This is the most beautiful venue we’ve ever played.” A rather bold statement, given the band has received such positive reception and a growing audience; many beautiful venues are coming their way.

As each song maintained the crowd’s enthusiasm, with strobe lights and small talk, I found that the true turning point of the show came by the eighth song. Everything got quiet and slowed down as the band entered into the gem that is the tenth and last track of Antisocialites, “Forget About Life.” As the intimate track asks, “Do you want to forget about life with me tonight?” it is a fitting reminder of why people go to shows to begin with: concerts create an escape by providing a community of people you have something in common with, music you enjoy, and a live performance of the sounds that are constantly running through your headphones. The experience is electric.

Teasing that they were performing their last song, Alvvays had the room chanting along to “Party Police,” with their lyrics almost pleading: “You don't have to leave, you could just stay here with me.” Even as the band walked off the stage, the crowd did exactly as the song said: they stayed right in place, ready for the encore. As they epicly concluded on “Next of Kin,” you could tell as they left the stage the crowd was still wishing for more, making the show an overall success.

When she’s not out and about, Carmen Llerena can often be found sitting in her dorm photoshopping random images, flipping through fashion magazines, or finding obscurely named bands on Spotify.