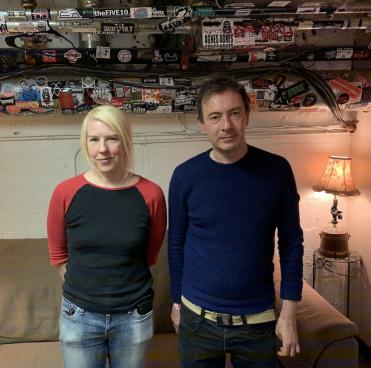 Tune in on Monday, November 18th @ 8:20AM to listen in on DJ Massari's recent conversation with Mark Clifford and Sarah Peacock of long standing UK based group, Seefeel. Together they discuss the band's involvement with Cocteau Twins, breaking multiple hiatus periods, and their upcoming new material.

Seefeel formed in early 1992 when conventional guitar music was stagnating; Grunge, with it's iconoclastic visual and aural aesthetic, was subverting the excesses of post-1980s arena rock and subsequently hijacking mainstream audiences hungry for something new.

Like the pulsating, polyrhythmic sound scapes they composed, Seefeel ebbed and flowed to and from existence; some noticed, buying up every last release as they trickled out from Seefeel's christened studio, 'Polyfusia'. Many remained fans to this day in light of the fact that, until recently, Seefeel had been on an open-ended and indefinite hiatus. In spite of a relative underexposure the importance of Seefeel's existence cannot be overstated. They provided a bridge between the electronic nouveau and indie-rock; being ultimately instrumental in opening up the parallel reality of electronic music to the more adventurous members of the indie scene.