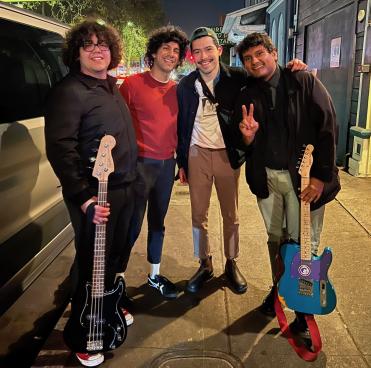 On Monday, May 9th @ 1PM DJ Rare Earth speaks with up and coming El Monte, CA based garage-rock trio, The Red Pears.

Much like the intense heat of Southern California’s San Gabriel valley, The Red Pears bring an energy and DIY attitude reminiscent of the garage rock scene coming out of New York in the
early 2000’s.  The band rounds out their unrestrained guitar drone with the sounds of cumbias, ballads, and rock-en-espanol found in their childhood homes.

Tune in to hear about the band's first national tour, including a sold out night at the Starline Social Club, a Viva! Festival announcement, musical influences, and what it’s like to be a POC band on the road, all while maintaining down to earth tableside manners as they greet their
fans across the country.

Following the success of their first two self released albums, recorded in an at-home
studio that doubled as the neighborhood daycare, The Red Pears delivered their most polished record yet, You Thought We Left Because the Door Was Open but We Were Waiting Outside.