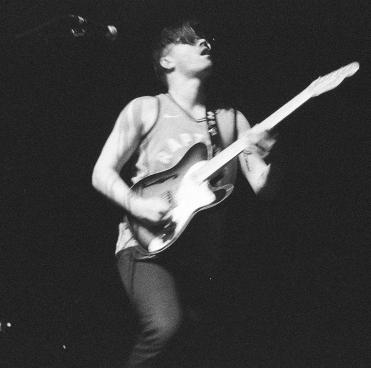 On Saturday, June 22nd at the Fillmore in San Francisco, Toronto-based punks PUP took to the Bay with loud catchy riffs, self-deprecating humor, and more than a little bit of a smug attitude regarding the outcome of the NBA finals. Here’s KALX volunteer Kat’s take after speaking with PUP’s guitarist Steve Sladkowski and watching/moshing the show.

I flashed my badge and a smile at security, and they let me pass through the barricades.

Wow, do I feel fancy.

I looked at the other photographers, all of whom were much older than myself, probably more experienced, and most likely representing some very reputable publications. It made me feel special—and intimidated.

I had never done full coverage of a band like this—writer, photographer, and even interviewer were all on me tonight. It was also my first time being the photographer for a show review and I was excited to get my toes wet.

PUP walked onstage. The phrasing of the intro guitar riff to “Morbid Stuff,” already burned deep into the chasms of my brain cells despite only being out for just over two months, incited a chaotic energy that triggered the spasmatic tendencies of my inner punk guitar nerd. I felt the crowd explode behind the barricade at my back. I felt the urge to start thrashing chaotically and pushing everyone around me, and then I felt a weight around my neck and remembered why I was there. 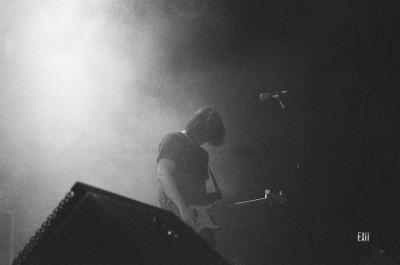 It’s strangely hard to describe PUP’s sound. Their music is upbeat but also heavy. Their lyrics can be self deprecating but hopeful. One of the more accurate descriptions I’ve come across is one from a YouTube comment—”ballsy pop punk.” But that still sounds too shallow. I like to think of an energetic balance when I think of PUP.

I remember in high school, when a friend showed me the band’s second full length The Dream Is Over, the most striking thing about PUP’s high energy sound for me, as a nerdy guitar player, was of course the guitar. Chord phrasings are creative and interesting, but still catchy and punky. Guitar riffs and solos are melodic and hooky, but never overpower the rest of the song. I had the chance to sit down and talk with PUP’s guitarist Steve Sladkowski and ask a little bit about his playing.

“My background is kinda in jazz, I have a jazz degree, but at some point as a guitar player you need to be okay with accompanying singers or like being able to be in a supportive role as opposed to being out front and playing a million notes all the time. And a big thing we think about when we’re writing and recording stuff is making sure that everything actually supports the song.” 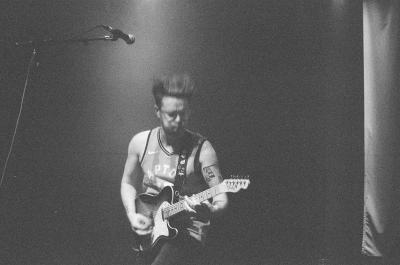 But PUP is more than just a band that plays catchy punk songs. One might even call them a multimedia experience. I remember the first time I watched the music video for their song “Dark Days” off their debut self-titled album and being enthralled by the narrative journey on which the band in cartoon form lead me. I can still see 16year old me desperately wishing that my life was a DIY adventure like theirs, instead of being a boring AP student just listens to punk while studying. Some of their other music videos are even interactive video games where you can choose a band member as an avatar and take them on alternate storylines. The videos released for the first two singles off of Morbid Stuff didn’t fail to disappoint. First I asked Steve about the video for “Free At Last,” which involved a zine and some video tutorials.

“Initially we put together a zine, and we put the chords and lyrics with no reference point whatsoever. And we thought it would be really funny if people could see this and try to learn the song and do their own version. And people started sending us really interesting and fun clips to the point where we tweeted out that page from the zine, and it snowballed and snowballed to the point where we got 253 submissions. And we just thought, oh it would be cool if we made a silly YouTube tutorial using a bunch of the footage from people, and I like to think of it as kind of a love letter that’s a mashup of different versions of the song and then us playing it. And it was fun you know? And I think extending that to people and seeing how much work they put into that… I’m really proud of that...

It started as an idea that made us laugh, and it just turned into something really cool and organic.”

It’s strange to think that people from all over the world were able to come together via zines and the internet to have fun making a goofy video for a song about struggling with depression, of all things. And yet, conveying the complexity of the human experience by looking back on times of personal struggle and laughing at themselves is what PUP has been doing since their first album. You can wake up and realize “nothing really matters at all” and feel both the weight of nihilism as well as a freedom from pressure, if truly nothing really matters at all.

“[It’s about] being open and honest about it, and letting people know that they’re not alone. And that it’s weird and that you’re allowed to laugh too.”

The band is open about their stance against the romanticization of the tortured artist and how the fetishizing of mental health struggles yields a commercial benefit for the big players in the music industry. Lead singer Stefan Babcock explicitly calls out the commodification of mental health struggles in the music industry in “Full Blown Meltdown” off of Morbid Stuff.

“I'll be sure to write it down
When I hit rock bottom
For all the people who love to fetishize problems
And to tell the truth
I fetishize them too
It's pretty messed up, isn't it?” 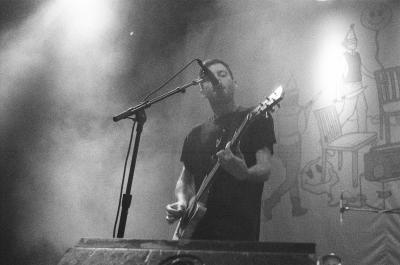 I asked Steve if this is why, in spite of all the heaviness and intense sense of personal struggle in PUP’s lyrics, the band still manages to not only be catchy, upbeat, and pop-punky, but also, overall, an incredibly funny band to follow.

“The four of us are not naturally [serious] and it’s just not really the band we are. And we all love music and bands and records that have juxtaposition and balance… where it just doesn’t go too far in one direction or too far in the other, and it ultimately it then becomes about people coming together and having a good time, and to—not forget, but to have a communal experience that can in some way help them.”

I heard my roll of film finish and I quickly capped the camera’s lens and stuffed it into my backpack. I ducked underneath the arms of other photographers. I heard the intro riff to “Kids”.

If I’m fast enough I can still get in the pit before this song ends.

Trying to be as efficient as possible, I reached into my pocket to pull out a couple dollars as I power walked towards coat check, so that I would be ready to hand over my bag and pay as soon as I reached the counter.

I wove in and out between the members of the audience hanging in the back of the venue, the kind who are not willing to risk getting close to their rowdier counterparts near the front who might knock their drinks out of their hands. I passed the sound booth. 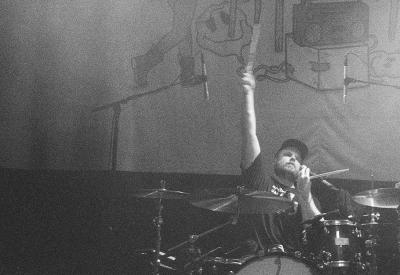 I got to the counter.

I dove right in. 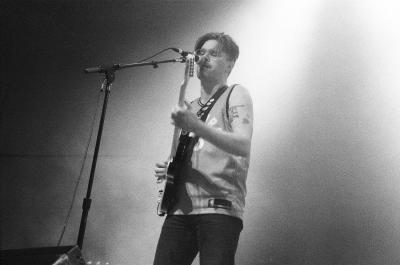 I reunited with the friend I came with for just a moment.

We laughed ecstatically while we could make eye contact. Then she got sucked up by a different eddy in the pit and we were whisked off in different directions.

The outro riff to “Kids”, same as the intro, echoed out in a wave of reverb. My job was done, and now I could actually be a part of the rest of the show. 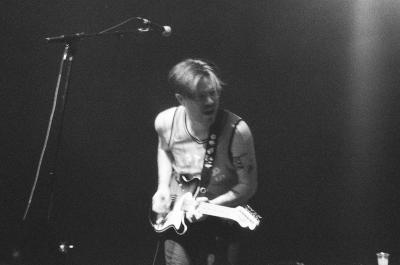 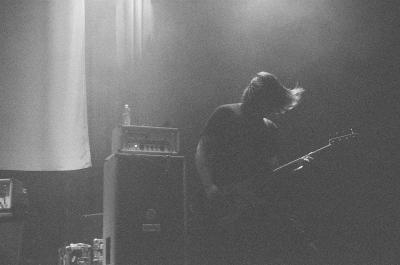 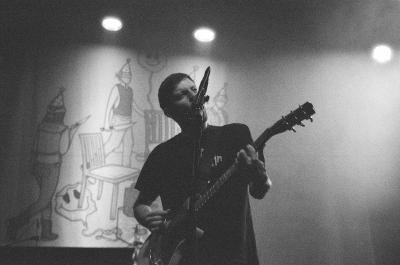