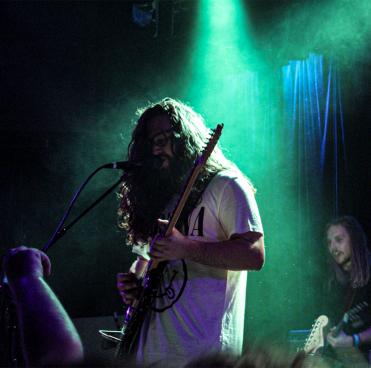 Ahead of their performance, KALX DJ Carmen’s Paradox spoke with vocalist/guitarist Jack McEwan and rhythm guitarist/keyboardist Chris Young about the difference between British, Australian, and American crowds, their sonic guilty pleasures, and crumpet recipes. Read the interview below:

Jack: It was amazing, actually. We had the Mad Alchemist, Lance doing visual. It was incredible! It was a proper liquid lightshow on the entire wall, and it was just mad! Basically, the whole of the venue turned into this lightshow, which was nuts! And we played with Morgan Delt who I’ve been listening to since the beginning of this project. His music pretty much started one of the inspirations to start Crumpets so that was mad to like meet him and actually have a chat. And Meatbodies as well, they’re doing their new record. But [with] FUZZ and stuff, it was weird— it’s like I've been listening to all these people for years and then to finally come to LA and play with them is this weird dream gig. It was nuts; a very pinch yourself kinda moment.

Well that’s awesome! I’m glad to hear everything’s starting off on a high note. So in a prior interview you guys talked about how British crowds differed from Australian crowds. Since you’re back in North America, how would you characterize your American audience?

Jack: They were wild yesterday! Everyone was just moshing to anything! But death circles— it would just be like a gigantic circle pit, and it would be going the entire set! I think just after Morgan Delt and Meatbodies started, it started off in its sort of baby form that in the end I think people were just so used to running around in a circle that that just existed. Some say it’s still going now…

It’s varied. I think there’s a lot of similarities between Australia and America. English crowds will chant a lot. They’ll hum riffs, and chant riffs, which is really cool, but Australia and America are very kinetic. They just wanna sorta jump around and be involved with the music a lot more which is cool, like crowd-surfing, everyone’s on stage.

Jack: Contenders, I forgot about contenders. There probably was heaps, but it was originally just watching like loads of Mighty Boosh. I think we were sort of involved in that weird kind of world where Noel Fielding would just be gallivanting off on his own tangent.

This past May you guys released your third album, And Now For the Whatchamacallit! Which are your favorite songs to perform from the new record?

Jack: We were talking about that in the car today.

Chris: “Hymn For A Droid” is received pretty well.

Jack: Yeah, and “Bill’s Mandolin.” We were talking about how terrifying they were to play before we had Chris. We were a four piece and wrote all the songs sort of as an idea for a festival kind of sound. Not in pop territory, but it kinda dabbles in that, so when we were doing it, I was like Oh my God, I’ve completely sold out. I’ve done this. Like playing “Bill’s Mandolin” and “[Keen For] Kick Ons” is for your hardcore rock fans at your own shows, and I’m like Oh man, I feel like such a poser! And then we got Chris and it sounded like it just got that fatness back and intended it to what [the song] would be like. And now it’s definitely one of the most fun songs to play.

Chris: Kick Ons has got a nice little tasty outro.

With acts like King Gizzard being from Melbourne, Tame Impala and Pond being from Perth like yourself, so much of the best psych rock seems to be coming out of Australia! Do you have any theories as to why?

Chris: It’s the water, right? There’s some radioactivity going on in that water.

Jack: Yeah, I’ve literally gotta do a whole massive study on it, but I’ve gotten it down to quite a very pinpoint. I think it was when Wolfmother did their first album tour. They went around the whole of Australia. I know Kevin Parker was at that show. So he would have gone there, watched Dungen support Wolfmother, sandwiched the sound together, gone home, started recording an EP, and then that came out and everyone was just like King Gizzard. We’re like Oh hang on, Oh Sees sound. Get that with this Wolfmother-Dungen new band— Tame Impala sound. And then Pond came, and then everyone just started taking bits from each other and now its this stacking block of sounds.

Chris: We had a bit of Limp Bizkit going for LOLs.

Jack: I suppose Sum 41’s a bit of a guilty pleasure for me. I did like that Taylor Swift song, what is it, Romeo and Juliet? (sings) 'Romeo save me.' We covered that in a band in school. That guitar riff is sick.

Chris: Well you can’t get passed the marmalade on crumpets.

Jack: Sprinkles with a candle, and you light it.

Jack: Nandos sauce, you can’t go wrong with Nandos sauce. Or I suppose we’re in America. Some hot sauce.