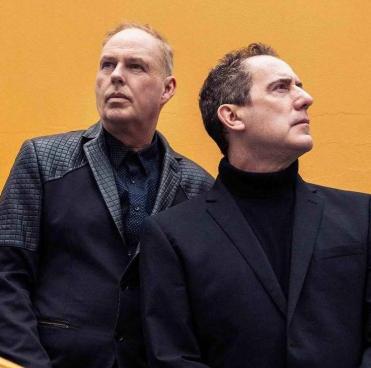 Join DJ Mixtress 9 on Tuesday, May 17th @ 11AM when she speaks to Paul Humphreys of Orchestral Manoeuvres In The Dark (OMD) ahead of their upcoming show at The Fox Theater in Oakland on May 24th.  Tune in to hear about the duo's 40th Anniversary Tour, how they got started, and what is in store for the days ahead.

Four decades has seen – give or take a decade break – Orchestral Manoeuvres In The Dark sell an astonishing 25 million singles and 15 million albums, establishing them as electronic synthesiser pioneers and one of Britain’s best-loved pop groups. Their 13 long players include benchmark- raising classics Orchestral Manoeuvres In The Dark (1980), Organisation (1980), Architecture & Morality (1981) and Dazzle Ships (1983). Three more since their reactivation 12 years ago have culminated in 2017’s The Punishment Of Luxury, which was hailed by fans and critics alike as a return to the shimmering brilliance of classic early singles such as nuclear lament Enola Gay and the plangent Souvenir. Their incredible career and 40th anniversary was celebrated last year with the release of a momentous anniversary box- set and critically-acclaimed world tour.

In today’s OMD, Stuart Kershaw (who has worked with the band in various capacities since 1991) replaces long-time drummer Malcolm Holmes, alongside keyboardist/saxophonist Martin Cooper, but throughout their 40 years of OMD, founders Andy and Paul have retained and rekindled the friendship that blossomed as teenagers, and the inspiration that strikes when they’re together.