MUNA delivered a so-so-so-solid performance at the Fillmore 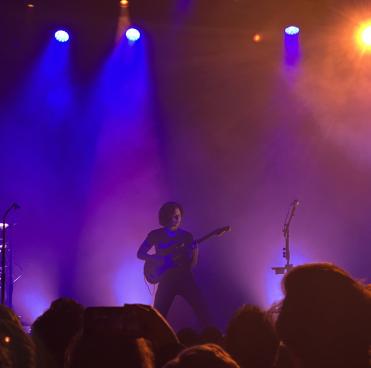 On October 23 and 24, Indie pop trio MUNA performed at the Fillmore as part of their 2022 North American tour. Consisting of singer Katie Gavin, guitarist Josette Maskin, and instrumentalist Naomi McPherson, MUNA has gained widespread attention for their energetic tracks and high quality production, a standard of quality which carried over in their live performances.

In the past year, discourse around concert etiquette has been circulating the internet. In a post-quarantine world, it’s easy for our enthusiasm to get the best of us. I’ve seen a handful of videos of teenage fans at indie concerts running to the barricade. Coupling these with the frequent rants people have posted about sour concert experiences made me nervous about seeing MUNA at the Fillmore Theater. In spite of this, the experience was fantastic, reminiscent of pre-quarantine concerts devoid of rude tweens and poor air circulation. 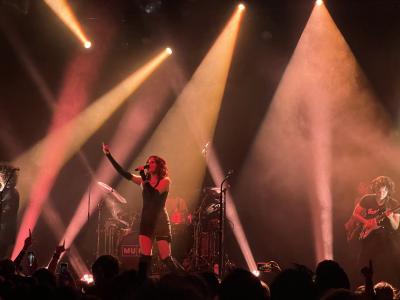 MUNA released their third studio album this past summer, garnering considerable attention due to Phoebe Bridgers’s producer credit. Their top track “Silk Chiffon” blew up due to its positive representation of queer female relationships. The impact this song and others by the band has had on the queer community could be clearly felt amongst the crowd, who cheered loudest for explicitly queer songs like “What I Want” and “Number One Fan.” It was clear that the band fed off of this energy; their stage presence remained explosive from the moment they strutted out to the cheers of the crowd, right up until the last note. However, the unfortunate sound engineering made it difficult to make out most of the lyrics. The vibrations of the guitar and bass made an awkward buzzing that drowned out the vocals. 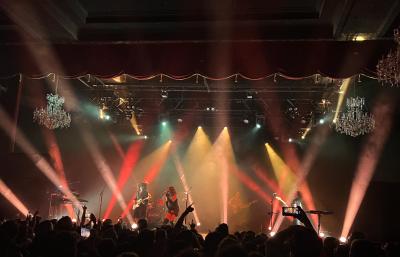 Nevertheless, MUNA clearly has a dedicated following, as the vast majority of the audience managed to still sing along to nearly every song. The lighting and sheer energy of the band further enhanced the experience, making for a uniquely immersive hour and a half. However, I felt a bit blindsided by the explosiveness, primarily due to the opener, Jensen McRae. McRae’s style is very reminiscent of classic sad girl inside artists such as Julien Baker, whose fans overlap with MUNA listeners. Keeping this in mind, it’s understandable why they picked her. McRae’s songs, however, were almost too different from MUNA’s setlist. She sang a string of melancholic acoustic ballads, setting up a sense of whiplash that hit when MUNA began performing. I’ve been to several indie shows, and this was the most noticeable difference I’ve seen between the opener and the headliner. It consequently took longer than usual for me to get into the main performance, which primarily happened due to the clear enthusiasm of the band. When I finally did sink into the newfound buzz, it became easy to understand why MUNA had blown up.

I walked out of the theater with a noticeable sense of lightness. There was something incredibly profound about the sense of freedom in the room. MUNA is one of those rare bands who doesn’t hint at the fact that the stories they’re telling are queer. It was exciting to watch the joy in the room build with each gay verse. It was quite exciting, as if I was watching a manifestation of the positive changes that’ve been made in the past decade. It’s difficult to imagine MUNA doing anything but growing, and I anticipate (and hope) that their initial explosion of fame will propel them to even greater heights.