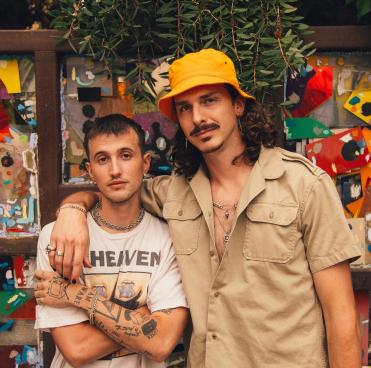 As much as the Mob Rich's sound owes to the specific otherworldly chemistry shared by Los Angeles transplants Maxwell Joseph and Connor Pledger, the charming melancholy, adventurous soundscapes, and big hooks they conjure are built for everyone. The duo make intimate and bold music destined to build a broader community with kindred spirits. These are new anthems for the outcast.

The band's full-length debut, Why No Why, is a collection of conversations in musical form, draped in an effervescent atmosphere. Careening between wry observations and sharply optimistic affirmations, Mob Rich demonstrates a commitment to artistic authenticity on the record, on the stage, and screens big and small. Straightforward hooks, with flourishes of grand theatricality, collide with existential themes and joyful whimsy.